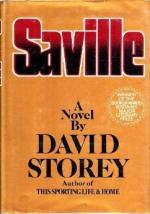 David (Malcolm) Storey
This Study Guide consists of approximately 40 pages of chapter summaries, quotes, character analysis, themes, and more - everything you need to sharpen your knowledge of Saville.

This detailed literature summary also contains Topics for Discussion and a Free Quiz on Saville by David (Malcolm) Storey.

Colin Saville's life is a blank canvas. As a young boy, he is full of promise and hope for the future. His parents, Ellen and Harry Saville, work hard to give Colin every opportunity, opportunities that they never had growing up.

The story begins before Colin is born. The family then consisted of Ellen, Harry and Andrew, the oldest son. Andrew's death from pneumonia forever changes the lives of Harry and Ellen Saville. Despite having three more sons, Ellen never recovers from the grief of losing her firstborn child.

Harry Saville works down in the pit in a nearby coal mine, called a "colliery." The family lives in a miner's cottage and, since it is pre-World War II, the cottage is not outfitted with running water or a stove. Although Ellen tries to make her house a home, she can never escape its rundown poverty.

After Colin is born, brothers Steve and Richard follow. The family can barely feed three people, let alone five. Then Colin excels. He passes his entrance exams and is admitted to a prestigious school called King Edward's Grammar. It is there that his intellect blossoms and, as a result, he begins to see the lack of promise in his own family.

As Colin matures, he feels that he is a fifth wheel, no matter where he goes. He searches for redemption in the women who pass through his life but every one lets him down. From his mother to his series of girlfriends, he can't seem to find the love or the wife he hopes for. While he says he loves these women, it is really only lip service because Colin doesn't know what love is. In fact, he can barely stand himself.

It isn't until the very end that Colin finally escapes the bondage of his hometown. Nearly everyone with whom he grew up has left and now it is his turn. Although his mother is deeply disappointed in him, she is the only family member to accompany him to the train station.

More summaries and resources for teaching or studying Saville.