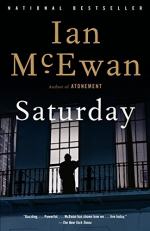 Ian McEwan
This Study Guide consists of approximately 35 pages of chapter summaries, quotes, character analysis, themes, and more - everything you need to sharpen your knowledge of Saturday.

This detailed literature summary also contains Quotes and a Free Quiz on Saturday by Ian McEwan.

The following version of this book was sued to create this study guide: McEwan, Ian. Saturday. New York: Anchor Books, 2005.

The novel’s main narrative takes place in London on Saturday, February 15, 2003. The protagonist is Henry Perowne, a 48-year-old neurosurgeon. He is married to a lawyer named Rosalind. Henry has a deeply loving relationship with Rosalind and with their two children: Daisy and Theo. Daisy is in her twenties. She loves literature, and her first collection of poetry is scheduled to be published by a major publishing house in a few months. She has been studying abroad for the past few months, but she has recently returned to England and will be visiting her parents in the evening. Henry’s son, Theo, is 18 years old and is beginning to attain some professional renown as a blues guitarist.

In the morning, Henry awakes and stands on his balcony. He sees an airplane heading for Heathrow Airport. The airplane is partially on fire. Henry fears that it may be a terrorist attack. However, he soon sees on the news that it was simply a mechanical failure on a cargo plane. The only people aboard were the two pilots, neither of whom were hurt. Henry leaves the house and drives towards the club where he plays squash. He is scheduled to play a match against his friend and colleague, Jay Strauss. On the way, he sees people heading downtown for a large protest. The protest is meant to demonstrate dissent against Britain’s agreement to help invade Iraq. Henry is unsure whether or not he should support the invasion.

While driving, Henry’s car lightly collides with another car. There is minimal damage, but Henry insists on trading insurance information with the other driver. Henry soon realizes that the other driver—who introduces himself simply as Baxter—is a criminal. Baxter is with two other men. Baxter and his associates prepare to physically attack Henry. Henry notices in Baxter some symptoms of a degenerative brain disease. Henry points this out and escapes in his car during Baxter’s consequent hesitation. Henry arrives for his squash game with Jay. After the game, Henry drives to the nursing home where his mother resides. His mother has dementia and can retain very little information about her life.

Henry then returns home and begins preparing food for the planned family dinner. His daughter Daisy arrives, and they excitedly greet each other. They soon begin talking about the invasion of Iraq, and Daisy becomes upset that Henry does not staunchly oppose the invasion. Henry’s father-on-law—a famous poet named John Grammaticus, is the next to arrive, soon followed by Theo and Rosalind. Then, surprisingly, Baxter enters the house. He carries a knife and is accompanied by an accomplice. Henry realizes that Baxter is seeking revenge for Henry’s earlier humiliation of him. Baxter forces Daisy to take off her clothes, and henry is shocked to see that Daisy is pregnant. Due to Baxter’s degenerative brain disease, Baxter soon experiences an extreme mood swing. His accomplice becomes confused and then flees, after which Theo manages to disarm and subdue Baxter.

In the struggle, Baxter’s head collides with a wall, and part of his skull fractures. Henry is soon called to the hospital to operate on Baxter, which henry does successfully and without resentment. Henry then returns home and talks to Rosalind about Daisy. Daisy fell in love with a man she met while studying abroad, and she became pregnant by that man. Daisy and the man plan to live together and raise the child together. Henry and Rosalind remain optimistic about Daisy’s future.

More summaries and resources for teaching or studying Saturday.