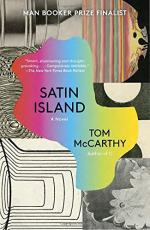 Tom McCarthy
This Study Guide consists of approximately 46 pages of chapter summaries, quotes, character analysis, themes, and more - everything you need to sharpen your knowledge of Satin Island.

“Satin Island” is a contemporary avant-garde novel by Tom McCarthy in which anthropologist, U., attempts to write a report about humankind at large, and the great truths that he believes are behind everything. When the novel begins, U. is at Turin airport in Italy, waiting on a delayed flight. U. works for the Company, a consulting firm based in London, and now one of countless organizations working on the Koob-Sassen Project, about which U. says he cannot say much but that which he says has affected the reader’s daily life in countless ways. While the reader may not notice the Project, it would indeed be noticed in its sudden absence. U.’s primary job at the Company is to analyze information about people, trends, patterns, and target audiences so that products, policies, and other items may be specifically or generally tailored.

U. finally returns to London where he is encouraged to continue working on his Great Report, the very first assignment he ever received from the Company’s boss, Peyman. The Great Report will be U.’s crowning achievement at the company and as an anthropologist, in which he will study the behavior and beliefs of humankind to discover deeper and connective truths. U. struggles repeatedly through the course of the novel to begin writing the Great Report, but has no success. All the while, U. is assigned to work on the Project as well.

At the same time, U. is dating a woman named Madison, who herself was once delayed in Turin. For much of the novel, she will not say why she was there. U. repeatedly attempts to get her to tell him all the while he struggles to work on the Great Report. Additionally, U. takes great interest in the case of a parachutist who fell to his death, and whose death is ruled a murder when it is discovered by authorities that the man’s parachutes had been tampered with. U. becomes obsessed with the case, but no suspect is ever taken to court and convicted. U. plugs away at the Project, though his specific work cannot be relayed to the reader. However, he manages to parlay his distractions into his work. When Peyman’s right-hand man, Tapio, asks why U. is studying parachutes, U. explains that parachutes, like the Project, are meant to convey someone from Point A to Point B, and that the important part is not Point B, but the transition between the two.

U. eventually learns from Madison that she was in Italy to protest a G8 Summit with her then-boyfriend, at which time she experienced police brutality and was essentially kidnapped. At an unknown villa, she was made to pose in classical ways while being shocked with a cattle prod by an unknown late-middle-aged man before being released. Madison then went on to the airport in Turin to fly home. U. ultimately has a dream where he flies over a place called Satin Island, where trash is being burned in the center between abandoned factories. U. has no idea what the dream means, but wants to find out. U. learns the Project has been a huge success, and he is praised publicly as one of its engineers. Meanwhile, he abandons his Great Report, believing it can never be written. He is assigned to speak about the Project in New York, where he contemplates taking the ferry to Staten Island to see if there are any similarities with Satin Island, and if there is any truth behind the place and his dream. Just as U. is about to board the ferry, he decides not to.

More summaries and resources for teaching or studying Satin Island.