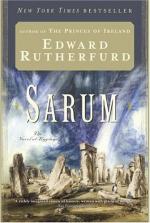 Sarum: The Novel of England Summary & Study Guide includes comprehensive information and analysis to help you understand the book. This study guide contains the following sections:

This detailed literature summary also contains Topics for Discussion and a Free Quiz on Sarum: The Novel of England by Edward Rutherfurd.

Sarum by Edward Rutherford is an epic historical novel about the area of England known as Sarum. This lengthy novel of more than one thousand pages spans more than ten thousand years,covering the span of English history from primitive times to modern times. The novel looks at the different events and issues that the people dealt with.

The novel opens in primitive times, 7,500 years before Christ. There is a very primitive society of hunters with small groups banding together and living in huts. One of the hunters, Hwell, his woman Akin, and their children migrate to the south for better hunting. They meet another family led by Tep, who leads them to Sarum, where they settle. Their descendants remain in the area for centuries.

This epic novel is basically the saga of five families. These are the Wilson, the Masons, Porteus with its different name variations, the Shockleys and the Godreys with their name variations. Some of them descended directly from Hwll and Tep, while others descended from the ancient Romans, Saxons and other groups that came to the area and remained. As Britain changes, the families change with their fortunes coming and going. Their lives and intertwined through events and marriage.

Sarum explains how places like Stonehenge were built as a great temple to the gods so the great chief Krona would have a male heir. During Christian times, the great cathedral at Salisbury is constructed, filling the lifetime of Osmund the Mason. The reader watches then as Porteus, a Roman soldier who marries and remains in Sarum, constructs a Roman style villa with its rich mosaics and introduces Roman farming methods to the area, which improves the quality and quantity of the estate's output.

The reader also sees the religious and political development of Britain through Sarum. There are the days of paganism with its human sacrifices and the building of the temples and the barrows. There is the gradual transition to Christianity with the pagans practicing their rites in secret, a practice the Protestants followed many years later. There is the burning of the heretics under Mary Tudor and the Puritan burning of witches. The different Protestant sects struggled until they all came to live together peacefully.

The political development of England gradually changed from the great chiefs into a constitutional monarchy. The reader sees how the institutions like the Magna Charta, jury trials, and Parliament came into being and watches how various wars, both internal and external, are fought.

Through all of this change, life goes on for the five families, as they adapt and cope with their changing world in Sarum.

The reader will thoroughly enjoy this lengthy saga. It is long but well worth the time spent reading it.

Sarum: The Novel of England from BookRags. (c)2022 BookRags, Inc. All rights reserved.