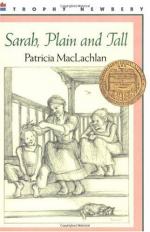 Patricia MacLachlan
This Study Guide consists of approximately 41 pages of chapter summaries, quotes, character analysis, themes, and more - everything you need to sharpen your knowledge of Sarah, Plain and Tall.

Born in 1945 in Cheyenne, Wyoming, Patricia MacLachlan grew up as an only child whose parents encouraged her interest in reading and writing. MacLachlan graduated from the University of Connecticut and in 1962 married Robert MacLachlan, with whom she has two sons and a daughter. The family lives in Leeds, Massachusetts.

During the 1980s, MacLachlan has enjoyed much success as a writer. Her first novel, Arthur, for the Very First Time, won the Golden Kite Award from the Society of Children's Book Writers in 1980. Unclaimed Treasures was a 1984 Boston Globe-Horn Book Award honor book, and in 1986 Sarah, Plain and Tall won the Newbery Medal. The latter book was inspired by a trip to the North Dakota farm where MacLachlan's father was born and by a true story told to MacLachlan by her mother.

More summaries and resources for teaching or studying Sarah, Plain and Tall.