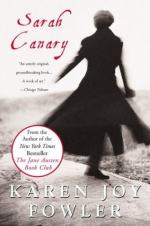 Sarah Canary is about a mysterious woman who appears in front of Chin, a Chinese worker, in the Washington Territories in the early 1870s. Her most marked characteristics are that she doesn’t speak and that she is incredibly ugly. Chin is drawn to her, thinking she may be an immortal come to test him. His uncle tells him to take her away from their camp because they can’t afford to have a white woman in their presence. Chin leads her away from the camp, equal parts leading and following her. Chin gets frustrated with the amount of noise Sarah makes and strikes her. As they begin to lose their way in the fog, Chin is knocked unconscious on a headstone and is separated from Sarah.

Chin finds Sarah at the Steilacoom Asylum, where he meets B.J., one of the residents, who hears inanimate objects speak to him from time to time. After the warden gets rough with Sarah, Sarah flees the asylum with Chin and B.J. in tow. They make their way through the forest, encountering Will Purdy, a postmaster, who introduced them to his friend Harold, a man who manages unusual creatures in freak shows. He gives up the embalmed mermaid he has been traveling with in exchange for Sarah, declaring that she is a wild woman.

Separated from Chin and B.J., Sarah is subjected to appearing on stage as the Alaskan Wild Woman. When she doesn’t prove to be a crowd pleaser, Harold makes sexual advance toward her. Adelaide Dixon, a feminist lecturer, is scandalously traveling alone, interrupts Harold. Harold is staged during the altercation with the women and Adelaide flees with Sarah, thinking she is Lydia Palmer, a woman who escaped from San Francisco after murdering her husband.

Sarah and Adelaide cross paths with Chin, B.J., and Purdy. Adelaide makes sure they get away from the men. They flee to catch a boat away from the men. Chin, B.J., and Purdy go after them after finding Harold has been stabbed. Purdy agrees to take Chin and B.J. to get a canoe to make their way. While the men negotiate with Sam Clams, an Indian, Sam spots Harold stealing one of his canoes. Sam and the men, along with Sam’s wife Old Patsy, go in pursuit of the women and Harold.

A storm causes both canoes to capsize. Chin and B.J. are picked up by the same steamboat that Adelaide and Sarah are traveling on. They discover that a stowaway is on the boat as well. Adelaide learns from a newspaper that the real Lydia Palmer has been captured. When she speaks with B.J., she learns Sarah’s identity, so far as B.J. and Chin know it. They disembark in San Francisco in hopes of getting Sarah to a women’s rescue mission. Harold kidnaps Adelaide thinking he’s captured Sarah. He offers Chin and B.J. a trade. During the trade, Sarah disappears without a trace.

Adelaide attends the trial of Lydia Palmer and sees her acquitted. During an angry mob outside their hotel, B.J. is killed. Adelaide hires a detective to find Sarah and Chin returns to China.