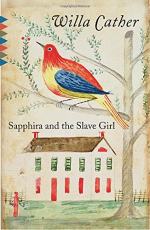 Willa Cather
This Study Guide consists of approximately 37 pages of chapter summaries, quotes, character analysis, themes, and more - everything you need to sharpen your knowledge of Sapphira and the Slave GIrl.

Sapphira and the Slave GIrl Summary & Study Guide includes comprehensive information and analysis to help you understand the book. This study guide contains the following sections:

This detailed literature summary also contains Quotes and a Free Quiz on Sapphira and the Slave GIrl by Willa Cather.

The following version of this book was used to create this study guide: Cather, Willa. Sapphira and the Slave Girl. New York: Vintage Classics, 1975.

The story takes place in Back Creek, Virginia in 1856. Henry Colbert and Sapphira Colbert are a middle-aged married couple, and they own several slaves. Henry has doubts about the morality of owning slaves, but Sapphira insists on owning slaves. Sapphira was born into a very wealthy family, and she somewhat resents now being part of a less wealthy family. Henry owns a grain mill and is heavily involved in its daily operations. He often sleeps at the small house attached to the mill rather than sleep at home. Sapphira suffers chronic illnesses such as dropsy. One day, Sapphira becomes paranoid that Henry has formed a secret sexual relationship with Nancy, a slave that they own. Nancy is in her late teens and is very beautiful.

Sapphira tries to sell Nancy, but Henry forbids it. Henry and Nancy do not have a sexual relationship, but Henry enjoys Nancy’s quiet efficiency and her kind, gentle nature. Sapphira watches Nancy more closely and becomes more vindictive towards her. Sapphira is generally cruel to the slaves. Years ago, she forced two of her slaves—Till and Jefferson—to marry. Jefferson is sexually impotent, and Sapphira did not want Till to become pregnant. Till is Nancy’s mother, and although the novel never reveals the identity of Nancy’s mother, it is likely that Till became pregnant with Nancy after being raped by a white man.

Henry and Sapphira’s daughter, Rachel, is in her late-thirties and lives in a house near Henry and Sapphira’s house. Rachel has two daughters. She used to be married, but her husband died of yellow fever. Rachel is a kind woman, and she has believed since childhood that slavery is fundamentally immoral. One day, Sapphira invites Henry’s nephew, Martin Colbert, to visit them indefinitely. Martin is a known sexual predator, and Sapphira tries to orchestrate scenarios in which Martin will have the opportunity to rape Nancy. Nancy becomes quite frightened by the situation, and she goes to Rachel for help.

Rachel coordinates an escape plan for Nancy, cooperating with contacts who are part of the Underground Railroad. Rachel tells Henry about the plan, and Henry gives her the money necessary to fund Nancy’s escape. Rachel helps Nancy escape from Virginia, and the Underground Railroad brings Rachel to Canada. Sapphira quickly deduces that Rachel helped Nancy escape, and Sapphira cuts ties with Rachel. However, Sapphira quickly reestablishes ties when Rachel’s children contract diphtheria. Sapphira arranges for a doctor to be summoned immediately, but only one of Rachel’s daughters survives.

25 years later—about 15 years after American abolished slavery—Nancy returns to Virginia to visit her mother. Sapphira’s chronic illnesses killed her a few years after Nancy’s escape. Henry freed his slaves after Sapphira died, and he helped the freed slaves find jobs and new homes. Henry died five years later in an accident at the mill.

More summaries and resources for teaching or studying Sapphira and the Slave GIrl.

Sapphira and the Slave GIrl from BookRags. (c)2022 BookRags, Inc. All rights reserved.