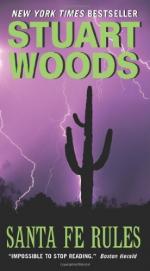 Stuart Woods
This Study Guide consists of approximately 29 pages of chapter summaries, quotes, character analysis, themes, and more - everything you need to sharpen your knowledge of Santa Fe Rules.

This detailed literature summary also contains Topics for Discussion and a Free Quiz on Santa Fe Rules by Stuart Woods.

Santa Fe Rules is a novel by acclaimed writer Stuart Woods. In this novel, Wolf Willet wakes in his Santa Fe home and prepares to travel to Los Angeles, but is forced to make an emergency landing in Arizona because of mechanical problems. While waiting for repairs to his plane, Wolf reads his own obituary in the New York Times, as well as those of his second wife, Julia, and his business partner, Jack Tinney. Rather than rush home to show the police he is still alive, Wolf goes to Los Angeles to finish his movie. This leads to suspicion when the police eventually learn of his circumstances. Santa Fe Rules is a mystery that is as amusing as it is entertaining.

Wolf Willet wakes in his Santa Fe home and quickly prepares to depart for Los Angeles despite the insistence of his dog to look in the guest wing of the house. Wolf pilots his own plane toward Los Angeles, but minutes into the flight discovers a mechanical problem that forces him to land in Arizona. While awaiting the repairs to his plane, Wolf reads his own obituary and that of his second wife, Julia, and business partner, Jack, in the New York Times. Wolf sneaks back into Santa Fe and goes to his house to retrieve some supplies and then visits his friend and psychiatrist, Mark Shea. Mark hypnotizes Wolf in an attempt to help him recover memories that he has lost of the full day of the murders. Mark learns nothing to help Wolf and even implies that his memories might implicate him in the murders.

Wolf returns to Los Angeles and finishes his latest film in secret from his house. During this time, Wolf meets editor Jane Deering and begins to feel emotions for her that are deeper than anything he felt for Julia. When the film is done, Wolf returns to Santa Fe and goes immediately to the home of Ed Eagle, a criminal attorney. Ed takes Wolf to the district attorney the following morning and helps him explain his situation to them. Then Wolf goes home to find the press already waiting in his driveway.

For the next few weeks, Wolf finds himself waiting for the shoe to drop as the district attorney's office builds a case against him. Wolf brings Jane out for a visit, taking her to Christmas party that gives the wrong impression to the community. Wolf also learns during this time that Jack, his business partner, has left the bulk of his estate to Wolf, giving the district attorney a motive for murder.

Finally Wolf is arrested and arraigned for triple murder. At this time, Wolf meets Spider, a biker who has been accused of assault. Spider takes an instant liking to Wolf and vows to help him in any way he can. At this same time, Ed meets with Barbara Kennerly, Julia's sister. Barbara is serving a five year sentence in New York for the murder of her husband. Barbara's boyfriend, James Grafton, is supposed to be serving time for the same crime, but escaped some months before. It is James Grafton who died in Wolf's house and Grafton whom Mark identified as Wolf.

While Wolf is out on bond, he shares Christmas with Jane and her daughter. During this time, Wolf learns that Julia had cashed in all his stocks, bonds, and retirement funds, taking more than three million dollars of his money. Ed chases down this money and returns it to Wolf. In the process of doing this, however, it is discovered that whoever ordered the money moved did it from Wolf's house. About this time, Wolf also gets a call from Spider, warning him that a woman has hired someone to kill him. As Wolf and Ed wait for the killer to come, they find themselves drugged with some sort of hallucinogen. Julia comes in with her friend, Monica, threatening to kill Ed, Wolf, and take Barbara away with her. It is then that they all learn that Julia killed Jack, Grafton, and her own sister, Leah.

Julia kills Monica to prove how serious she is. However, she did not count on Barbara not taking in the drug and being sober. Barbara pulls a gun out of her bag and shoots Julia. Julia is killed and the whole ordeal is over. Wolf decides to begin directing his own films and he makes Jane Deering his partner.