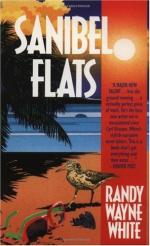 This detailed literature summary also contains Topics for Discussion and a Free Quiz on Sanibel Flats by Randy Wayne White.

SANIBEL FLATS is the story of the adventures of a man named Marion Ford, a biologist who lives in Sanibel, Florida after a long stint in Masagua, Central America. After his friend Rafe Hollins contacts him and tells him his son is missing and he is in desperate trouble, Ford leaves his quiet life in Sanibel to pursue Jake Hollins and rescue him from a Central American guerrilla leader. Called "Doc" by many of his friends, Ford's main focus is the study of various marine biology animals. However, after Rafe's call, he begins to do some amateur investigating, which intensifies after he finds Rafe's body hanging from the trees, an apparent suicide. When it becomes clear that the town of Sandy Flats is illegally declaring the suicide too quickly, Ford begins his investigation with the sheriff there.

Ford fortunately has connections in the Sandy Flats/Sanibel area since he grew up in Sanibel. It is through these connections that he learns more about Rafe, his history and what might have happened to his son, Jake, who is only 8 years old. Hollins had kidnapped Jake from his ex-wife in an attempt to save him from her drug and alcohol abuse-infused environment. When Rafe runs to Central America on the way to live in Costa Rica, his former business partners steal Jake as a piece of collateral because Rafe has stolen precious pre-Mayan artifacts from them. Hollins tells Ford this information on a phone call just before he commits suicide.

Steadily, Ford pieces the information together and thanks to a connection in Masagua, returns to Central America with a friend named Tomlinson to try to determine where Jake Hollins is. He talks to another revolutionary leader and guerrilla fighter that he is friendly with — Juan Rivera — and learns that Juan Zacul has Jake. Posing as artifact dealers interested in obtaining more illegal artifacts for sale, Ford and Tomlinson are brought to Zacul's camp. They find Jake in a holding tent for prisoners and eventually free him. Zacul dies from poison, and Jake, Tomlinson and Ford make it safely back to Sanibel. Shortly after his return, he finds Rafe alive and well with his sometime-girlfriend Jessica McClure. Jake is sent to his uncle Harry Hollins and Rafe is relieved that Ford has saved his son for him. Ford, meanwhile, returns to his sleepy life in Sanibel.