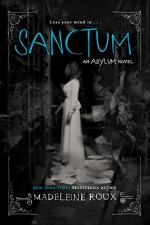 Madeleine Roux
This Study Guide consists of approximately 36 pages of chapter summaries, quotes, character analysis, themes, and more - everything you need to sharpen your knowledge of Sanctum.

This detailed literature summary also contains Quotes and a Free Quiz on Sanctum by Madeleine Roux.

“Sanctum” is a young adult horror novel by Madeleine Roux, and comprises the second installment in her “Asylum” series. When the novel begins, high school seniors Dan, Abby, and Jordan are still reeling from their terrifying summer spent at New Hampshire College Preparatory School where their dorm was formerly the Brookline Insane Asylum. Dan, Abby, and Jordan still experience nightmares from the place, and Abby in particular is hearing voices. They have received old carnival photographs as well, with the words “You’re not finished” on them. Dan goes to visit his friend Felix, who has been committed to a psychiatric hospital since the summer experience. Felix urges Dan to “follow them,” a list of numbers. Jordan discovers the numbers are GPS coordinates for addresses around the campus where the college and Brookline stand.

The three friends decide to go to New Hampshire College for a prospective students’ weekend as a cover to investigate things further. Dan in particular has a hunch he is a descendant of the asylum’s terrible warden, Daniel Crawford. Dan hopes to shed more light on this possibility during the visit, as well as to find out who is sending them photos. At New Hampshire College, Micah will be hosting Dan, Lara will be hosting Abby, and Cal will be hosting Jordan. The three friends plan to slip away from their college hosts whenever they get the chance. They also plan to visit Abby’s Aunt Lucy, who lives in town. Aunt Lucy is warm and friendly, but seems more excited than usual.

As Dan, Abby, and Jordan begin to explore, they find it unnerving that Micah always seems to be around. They also find it creepy that Cal and other students believe Warden Crawford to have been a misunderstood genius, based on the information given to them by their psychology professor, Caroline Reyes. Dan, Abby, and Jordan track down the addresses given to them by Felix. They are all abandoned houses, all associated with Warden Crawford in some way. In these houses, they find old journals, records, photographs, and other documents attesting to Crawford’s horrifying experiments on patients. These reveal that Crawford was involved in CIA experiments for mind control using LSD, but that he exceeded parameters and was fired.

Crawford then went on to do his own work, Dan and the others discover, by tracking down one of the former LSD test subjects to the area round Brookline. Over the years, Crawford perfected a three-pronged approach to total mind control: LSD, brain surgery, and hypnosis. As a child, Crawford was bullied and harassed, and wanted to control others as a result. He killed a hypnotist named Maudire who traveled with a carnival to steal Maudire’s gemstone pocketwatch emblazoned with a bright, shining star for use in hypnosis.

As these facts are uncovered, a secret society donning skull masks and red capes known as the Scarlets hone in on Dan, Abby, and Jordan. The three friends must outwit the Scarlets, who they come to realize include Micah, Cal, and Lara. All of them have been brainwashed, but Micah and Lara have been fighting it. They try to help Dan, Abby, and Jordan, and are both killed by the leader of the Scarlets, Professor Reyes. Dan, Abby, and Jordan are taken prisoner in Brookline by Reyes, who reveals that she too was brainwashed by Crawford, and is his adoptive heir. The entire town has been brainwashed. She also reveals that Dan is indeed a direct descendent of Warden Crawford. Seeking the safe word which will release people from brainwashing, she has created a trail of clues for Dan and his friends to follow and uncover old documents. She hypnotizes Dan to cut his own throat, but Abby shouts out the safe word, “Sanctum.” Crawford had chosen the word because a sanctum is a sacred or holy place, and in the human body, such a place is the mind.

Dan stabs Reyes as she tries to kill him. She sets herself on fire by falling into some candles, thereby setting Brookline Asylum on fire as well. Dan, Abby, and Jordan escape. As they wait for their rides to head home, Abby announces she is going to stay a few more days to make sure her aunt is alright. As Dan leaves in a taxi, he sees Micah’s ghost and whispers, “Sanctum.”

More summaries and resources for teaching or studying Sanctum.