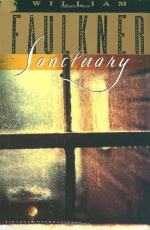 William Faulkner
This Study Guide consists of approximately 30 pages of chapter summaries, quotes, character analysis, themes, and more - everything you need to sharpen your knowledge of Sanctuary.

This detailed literature summary also contains Topics for Discussion and a Free Quiz on Sanctuary by William Faulkner.

"Sanctuary" by William Faulkner is the tale of the kidnapping of a young Mississippi debutante named Temple Drake. The story follows various threads to connect the characters and to explore the culture in rural Mississippi and Tennessee during prohibition.

Chapter 1 begins with Popeye meeting Benbow at a stream somewhere in rural Mississippi. It is May. Popeye stands on one side of the stream staring at Benbow, who at this point is a stranger. The men spend the next two hours staring at each other with little conversation. Eventually the men approach Old Frenchman Place, a plantation. There are three men on the porch, along with a dog. The group eyes Benbow suspiciously. Popeye introduces Benbow as "Professor." It is clear from the beginning that Lee Goodwin, owner of the plantation, is a no-nonsense bootlegger.

Benbow meets Ruby Lamar, a twenty-something woman who serves as the cook. Ruby is considered to be Goodwin's wife although it is not a legal arrangement.

Not long after Benbow leaves, Temple Drake and Gowan Stevens arrive on the scene. Stevens is drunk and wrecks his car on the way to the Old Frenchman Place to buy more whiskey. Temple's ordeal begins at this point.

Temple meets Ruby, who immediately sees that the young girl does not belong at the plantation or anywhere in her world. Ruby tries to convince Temple to leave the plantation before dark or there will be trouble. Temple cannot convince Stevens to leave.

Temple spends the night and is attacked on several occasions. The girl is traumatized to the point of being catatonic. Ruby does her best to protect Temple even though it is clear that Ruby has nothing but disdain for a debutante who obviously looks down upon Ruby and her kind.

Stevens leaves the Old Frenchman Place in the morning, with the intention of getting a car. Stevens does not wait for Temple and leaves her behind.

Eventually, Temple also leaves the plantation with Popeye. Instead of taking Temple home or back to school, Popeye drives to Memphis where he holds Temple captive. Temple has not tried to get away up to this point because she is covered in blood and is terrified that someone will see her.

Miss Reba is a woman of the world and knows exactly how to take care of Temple. Temple will remain at Miss Reba's for weeks, under the order of Popeye. All the women think Popeye is a great catch, completely ignoring Temple's predicament. All the while, Temple's family thinks she is still at school.

Horace Benbow takes an interest in Temple's case and tries to find her. It takes a while to track Temple down but Benbow is able to do so by paying for information. Benbow is also tied to the Old Frenchman Place when he agrees to represent Goodwin on a murder charge.

Faulkner manages to create a plausible story out of many strange happenings. Benbow, who had been seeking sanctuary in a mid-life crisis, seems to find himself again. Temple is brutally introduced to the real world. Benbow's sister, Narcissa, continues to be vain and self absorbed but seems to manage to help her brother. Both Popeye and Goodwin are convicted on murder charges and die.

At the end, Temple is returned home to her family and Benbow returns to Kinston to be with Belle.

More summaries and resources for teaching or studying Sanctuary.