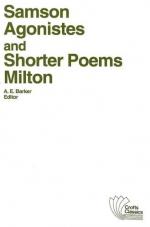 John Milton
This Study Guide consists of approximately 31 pages of chapter summaries, quotes, character analysis, themes, and more - everything you need to sharpen your knowledge of Samson Agonistes, and Shorter Poems.

In this volume, Christianity is regarded as a constant struggle between God and the devil, with humankind often caught in the middle. Discuss how this traditional view of Christianity helps to lend drama to Milton's poetry.

It has been argued that the devil is one of the most fully developed characters in Milton's writing. Based on his frequent mentions of the devil in this book, how would you describe the character of Satan?

Milton's poetry rejects Roman Catholicism and a Scottish sect of Protestantism in favor of his own Church of England. Describe the relationship between church and state in his writing, compared to contemporary views in the United States on that subject.

How would you describe the overall mood of the poems in this volume? For example, would you say they are sad, joyful, frightening, uplifting, angry, or good-humored? Give reasons for your...

More summaries and resources for teaching or studying Samson Agonistes, and Shorter Poems.