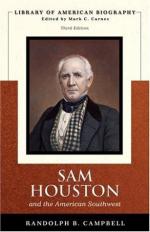 Randolph B. Campbell
This Study Guide consists of approximately 25 pages of chapter summaries, quotes, character analysis, themes, and more - everything you need to sharpen your knowledge of Sam Houston and the American Southwest.

This detailed literature summary also contains Topics for Discussion and a Free Quiz on Sam Houston and the American Southwest by Randolph B. Campbell.

Sam Houston was a soldier and statesman, who was one of the fathers of Texas. He was a hero in the battle for Texas independence and later he served the state as U.S. Senator and Governor.

Sam Houston was born in 1793 and his formative years were spent in Tennessee. He was a reckless and impatient youth and spent much time away from civilization in Cherokee country, where he learned the Cherokee language and was mentored by a Cherokee chief. He spent his early 20s in the army, where he was wounded in a battle with the Creek Indians, a battle directed by General Andrew Jackson.

After some time as a lawyer, Sam Houston became friends with Jackson and became a campaign manager and adviser in Jackson's presidential campaign. Continuing in politics, Houston became a U.S. Representative and then governor of Tennessee, before his young wife left him, causing a scandal and forcing Houston into exile.

Houston made a triumphant return to politics with a well-publicized House of Representatives trial, in which Houston defended himself for caning a congressman who criticized him in a newspaper. Though Houston earned an admonishment from the House, he was put back in the public eye.

Houston moved to Texas, a Mexican territory, at a time when Anglo Texans were threatening to break away from Mexico. Houston became caught up in the struggle, helping to organize a provisional Anglo government, and becoming elected commander in chief of the Texas army. Houston navigated a series of skirmishes and hostilities with common sense and thoughtfulness. General Santa Anna of Mexico invaded Texas intent to break up the government, and Houston defeated and captured Santa Anna at the battle of San Jacinto, cementing his place in Texas history.

Houston was soon elected president of Texas, and he dealt with such things as Texas' growing debt, Indian hostilities, and the threat of Mexico. He preached justice for the Indians and peace with Mexico, both very unpopular views. He also played a shrewd political game to annex Texas with the United States, playing off Great Britain and the United States' animosity towards each other.

Houston was next elected to the U.S. Senate. He continued to work toward annexation, which was achieved. In later years, he fought against southern secessionists and for the preservation of the Union. In his last years, he was elected governor of Texas. Despite all of his efforts, Texas seceded during his term and when he refused to take an oath of loyalty for the Confederacy, Houston was forced from office. He died from a prolonged illness in 1863, as the Civil War was raging.

More summaries and resources for teaching or studying Sam Houston and the American Southwest.