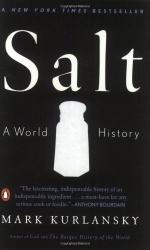 "Chinese governments for centuries had seen salt as a source of state revenue" (Chapter 1, pg. 29.)

"The ancient Egyptians may have been the first to cure meat and fish with salt" (Chapter 2, pg. 38.)

"Trade in salted food would shape economies for the next four millennia" (Chapter 2, pg. 44.)

"The Celts were innovators. The Romans were nation builders" (Chapter 3, pg. 60.)

"At times soldiers were even paid in salt, which was the origin of the word salary and the expression "worth his salt" or "earning his salt" (Chapter 4, pg. 63.)

"The Romans used garum in much the same way that the Chinese used soy sauce" (Chapter 4, pg. 73.)

"The difference between fresh cheese and aged cheese is salt" (Chapter 6, pg. 96.)