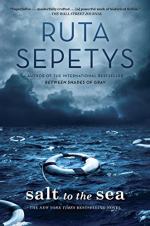 Salt to the Sea Summary & Study Guide includes comprehensive information and analysis to help you understand the book. This study guide contains the following sections:

This detailed literature summary also contains Quotes and a Free Quiz on Salt to the Sea by Ruta Sepetys.

The following version of this book was used to create this study guide: Sepetys, Ruta. Salt to the Sea. Penguin, 2015. Kindle edition.

Two unrelated people - Florian and Emilia - meet by chance after he saves her from an attacker, and together they seek shelter in a barn, where they meet other refugees: Joana, Heinz, Klaus, Ingrid and Eva. They get to know a bit more about each other, albeit in a wary way, and Joana tries to help Florian with his injury. She eventually succeeds in gaining at least some of his trust, despite his initial reluctance. It emerges that they are all running from something other than the war, especially the four primary characters from whose perspective the story is told - they are all being "hunted" by something. The other "perspective" comes from a young Nazi officer named Alfred, who emerges, through the things he says and how he talks about other people, as a very callous and dangerous person.

Other personality traits begin to emerge about everyone else in the new “group” assembled in the barn and no-one is by any means perfect. Florian is mistrustful to the point of coldness. He even considers abandoning Emilia for his own safety. Joana is pragmatic yet guilt-ridden. Eva keeps saying harsh things, only softened by the word “sorry,” and shows an unwavering will to simply survive. Heinz, the “shoe poet” as he becomes known, is a dispenser of earthly wisdom. The three most “innocent” characters are shown to be Ingrid, the blind girl who otherwise has very sharp insights into other people, Klaus the little boy “adopted” by the shoe poet, and Emilia, who idolizes Florian and maintains an innocent outlook despite all she has been through, though even she is forced to use a gun on a German soldier in self-defense. It becomes clear that they must all simply do what they must to survive.

It also emerges that Emilia is heavily pregnant, but does not tell the truth straight away as to how this came to be. Florian's "secret" is at risk of being uncovered by the shoe poet, a shrewd observer, but he is a good enough man to keep the secret safe. The group take shelter in an abandoned estate, where they manage to find some temporary warmth, shelter and respite from the freezing weather conditions, and to feel temporarily safe. However, this only lasts a short time, as they soon encounter the horrific scene of an entire murdered family and realize that this too is not a safe place.

At the first checkpoint, where they encounter many other evacuees, a bomb falls on the crowd killing many of them, and they are forced to hasten their escape. They make a plan to cross a frozen river to the other side, and Ingrid uses her blindness – and other heightened senses – to her advantage to test the water. Unfortunately, more bombs soon fall and Ingrid ends up falling through a hole in the frozen lake and is lost. They are all forced to keep on going and pushing on. They eventually reach Gotenhafen, with thousands of other refugees, where they also encounter Alfred, and the difference in their personalities really starts to show.

The group has to employ deception to get on board, most of all Florian who is on the run from his former comrades, having stolen a priceless work of art, which turns out to be the reason for his secrecy. A gradual building up of mutual trust - and the disintegration of the barriers keeping them all apart - takes place, as friendship develops, and even a romance between Florian and Joana blossoms. It also emerges, gradually, that each character is holding a secret from everyone else, and these begin to emerge over the course of the novel, as hardships continue. Much longer than expected is spent sheltering in a cathedral near the ship, increasing the chances of any of their secrets being discovered before they are able to board.

After some time, with the exception of Eva who boards another ship which will allow her to take her stuff, they all end up boarding the Wilhelm Gustloff – the ship originally designed for leisurely travel but now a makeshift refugee vehicle - and depart for Kiel. During the voyage, Emilia gives birth to her baby and Joana and Florian affirm their love. A short time into the voyage, the ship is attacked by Russian torpedoes which results in the ship sinking, and the loss of thousands of lives. The true personalities of all the characters begins to emerge, Alfred is shown as cowardly and indifferent to the suffering of others, while Joana, Florian and Emilia do all they can to help those in need. When boarding a lifeboat, Emilia allows the little boy Klaus to take her place, and the shoe poet ends up perishing in the attempt to jump from the ship and reach the lifeboat. Alfred becomes increasingly delusional and falls into the sea and drowns in an attempt to throw in Emilia after discovering her true identity, and eventually Emilia perishes too. Florian and Joana end up adopting Klaus and Emilia's baby, Halinka, and they go on to live a happy life.

Salt to the Sea from BookRags. (c)2022 BookRags, Inc. All rights reserved.