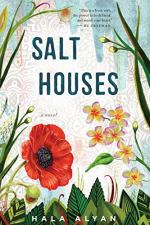 Hala Alyan
This Study Guide consists of approximately 78 pages of chapter summaries, quotes, character analysis, themes, and more - everything you need to sharpen your knowledge of Salt Houses.

The novel follows the experiences and movements of the Yacoubs, a Palestinian family uprooted by the destruction left in the wake of the 1967 six-day war. Salma, the family patriarch, reads her daughter’s coffee cup, seeing flight and hardships in the dregs. These omens signal an impending period of struggle for not only Alia but the entire family, although Salma cannot know this for sure. She also sees travel and luck, comforting her and making her feel better about her decision not to share her findings with Alia on her wedding day.

Alia marries Atef, a gentle young man who is best friends with her brother Mustafa. The three of them are very close. Mustafa is described as being very charming and handsome, as well as intelligent and kind, and it is Salma’s wish that he will settle down and marry a respectable woman. He is in love with a poor girl called Aya but knows he will never marry her for fear of his family and friends’ disapproval. Atef and Mustafa get involved in a political activism group and Mustafa is chosen to speak to their congregation. During the war, Atef and Mustafa are captured by Israeli soldiers and tortured. Atef gives the soldiers Mustafa’s name to appease his torturers and Mustafa is later killed. Neither the characters nor the reader knows how, why or where. Atef is plagued by the guilt he feels but knows that if he shares the story with Alia, she will leave him and hate him forever. He writes letters instead to no one, unburdening himself.

Alia and Atef have three children, Riham whom Atef is closest to, Karam whom Alia is closest to, and Souad who is known for her fearlessness and reckless nature. Their family moves to Kuwait after Nablus is invaded and Salma moves to Amman. Alia hates Kuwait and wishes to be closer to her mother but they stay where Atef’s job and the children’s school is. When Saddam Hussein and his army invade Kuwait in 1990, Alia and Atef are forced to relocate their family yet again, and their now grown up children begin their own independent lives. Riham stays in Beirut near her parents, Souad moves to Paris to pursue her art, despite her mother’s intense disapproval, and Karam moves to Boston to go to university. Gradually they all start beginning families of their own, convening in Beirut during summers with their children.

As the various political and religious conflicts continue to ravage the region, the family rallies together, putting aside their differences. When Alia, in her old age, is diagnosed with Alzheimer’s, her whole family does what they can to help and support her, and Atef loves her just as much as he always has. Alia is frustrated and confused by her deteriorating memory and grasp on what is real, and years for her younger years. When she hears her granddaughter singing a lullaby to her daughter, she is reminded of when she used to sing lullabies to her own children, and the story comes full circle.

More summaries and resources for teaching or studying Salt Houses.