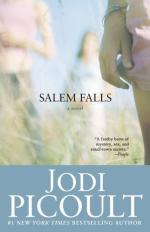 Jodi Picoult
This Study Guide consists of approximately 47 pages of chapter summaries, quotes, character analysis, themes, and more - everything you need to sharpen your knowledge of Salem Falls.

This detailed literature summary also contains Topics for Discussion and a Free Quiz on Salem Falls by Jodi Picoult.

Salem Falls by Jodi Picoult is a fiction novel about a man named Jack St. Bride who is released from jail after being convicted of statutory rape. He arrives in Salem Falls and gets a job at the Do-Or-Diner. He starts to fall in love with the owner, Addie Peabody, who lets Jack live with her dad, Roy. She needs Jack to watch Roy since Roy has become a heavy drinker. Addie had a daughter, Chloe, who died, and Addie copes with this by pretending Chloe is alive. Gillian Duncan is a local teenager and daughter of Amos Duncan, the richest man in town and owner of Duncan Pharmaceuticals. Gillian and her friends Whitney O'Neill, Meg Saxton, and Chelsea Abrams practice Wicca or witchcraft. They keep this a secret from their parents. Jack and Addie begin to fall in love.

Wes, a police officer who also likes Addie, is jealous and run a police check on St. Bride. He finds out Jack is a sex offender who was convicted of sexually assaulting a student, Catherine Marsh, while he was a teacher at Westonbrook Academy. The town soon finds out and Jack is threatened and beat up. Addie tells Jack that she was raped when she was young. Gillian Duncan, however, develops a crush of Jack. She sets up a Wiccan celebration with her friends in the woods. Gilly steals atropine, a hallucinogenic, from her father's lab for the celebration. Addie and Jack are spending the night together when they have a fight. Jack leaves and goes out drinking. When he leaves the bar, he starts to walk home, but ends up in the woods at Gillian and her friend's party. Amos Duncan, Gillian's father, and Charlie Saxton, police detective and Meg Saxton's father, soon find the girls. Gillian tells them she was raped by Jack St. Bride.

Jack is arrested and put in prison to await trial. Jordan McAfee is his lawyer. Jordan doesn't believe Jack is innocent at first, since Jack can't remember what happened that night, but starts to believe Jack as the truth comes to light. Charlie finds evidence that the girls had atropine that night, and might have been hallucinating. The tests also can't prove Jack raped Gillian, but they also can't rule them out. Despite the girl's efforts to hide the fact that they were doing a Wiccan ritual, Jordan gets enough of the truth out during the trial. Jack regains his memory and remembers the girls brought him into the ritual, but he didn't rape Gillian. The jury finds Jack not guilty and he is released. He and Addie plan to move away and go see Jack's mother. Gillian is revealed to have an incestuous relationship with her father at the end of the novel.

More summaries and resources for teaching or studying Salem Falls.