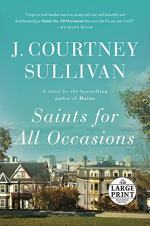 J. Courtney Sullivan
This Study Guide consists of approximately 76 pages of chapter summaries, quotes, character analysis, themes, and more - everything you need to sharpen your knowledge of Saints For All Occasions.

Saints For All Occasions Summary & Study Guide includes comprehensive information and analysis to help you understand the book. This study guide contains the following sections:

This detailed literature summary also contains Quotes and a Free Quiz on Saints For All Occasions by J. Courtney Sullivan.

The following version of the novel was used to create this study guide: Sullivan, J. Courtney. Saints for all Occasions. Knoof, May 9, 2017. Kindle.

In Saints for all Occasions by J. Courtney Sullivan, Nora Rafferty must face the lies she told her children when Patrick, the boy she raised as her own, died and his biological mother, Nora’s sister, attended the funeral. Nora had never told her children she had a sister, much less that her sister was a nun. Patrick’s death makes both Nora and Theresa reconsider their relationship and the arguments that left them estranged. When Nora’s children learn about the aunt they never knew, they wonder what else they might not know about their family.

Saints for all Occasions follows the lives of two sisters as they dealt with the changes in their lives when they immigrated to America from Ireland. Nora believed she would marry Charlie, the boy who lived on the neighboring farm and that they would join their family farms. It was a marriage with purpose and it appealed to Nora’s serious personality. When their dream was disrupted because Charlie’s father left the farm to Charlie’s older brother Nora assumed Charlie would go to America and meet someone new. Instead, he saved for the fare for Nora and Theresa to join him in America.

After they arrive in America the sisters are faced with a major trial when Theresa got pregnant out of wedlock. Even though Nora was unsure about marrying Charlie because she did not believe she loved him she changed her mind and agreed to marry him if he would agree to allow her to adopt Theresa’s baby, Patrick, and pretend he is their own. Theresa tried to stay with her sister and help with the baby but was unable to handle the pain she suffered because she wanted to raise her baby on her own. She ran away hoping that she could find a job and make enough money to support both herself and Patrick. Instead, Theresa decided to join a convent. At the convent, she spent time struggling with the way she had hurt her family along with her own hurts because she had been forced to give up her baby.

Meanwhile, Nora and Charlie had three more children. She never told them she had a sister and never told them Patrick was not their biological brother. Patrick was the child who gave his parents the most trouble. He got kicked out of Saint Ignatius prep school because he spat in a priest’s face. Patrick told his mother that he did not spit in the priest’s face but that the priest had been abusive to both him and his best friend Fergie. Later, Patrick came home covered in blood. He told his mother that he had gotten into a fight protecting Fergie. A group of boys had been beating Fergie and Patrick had run them away with a broomstick. One of the boys involved in the fight was blinded.

Years later Patrick managed a bar at which both his younger brother, Brian, and his best friend, Fergie, worked. He had been upset by an article in the Globe about Rory McClain, the man for whom his brother, John, was running a campaign for state senate. Rory had been part of the group of boys who had beaten Fergie on the day that Peter was blinded. In the article, Rory had taken credit for helping Peter get back on his feet by getting him clean from drugs and getting him a job. Patrick got drunk and died in a car crash. Nora called Theresa about the crash hoping only to hurt her sister with the news but instead, Theresa surprised Nora by having another nun call her to say she was coming to the funeral. Nora had no choice but to tell her children about her sister. Even though she had made up her mind to be angry with Theresa, Nora found herself feeling ashamed because she had treated her sister so rudely. In the final scenes, Nora went to her sister asking forgiveness.

More summaries and resources for teaching or studying Saints For All Occasions.

Saints For All Occasions from BookRags. (c)2022 BookRags, Inc. All rights reserved.