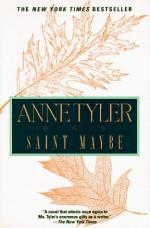 Anne Tyler
This Study Guide consists of approximately 36 pages of chapter summaries, quotes, character analysis, themes, and more - everything you need to sharpen your knowledge of Saint Maybe.

Saint Maybe by Anne Tyler is the story of a man seeking redemption for his past mistakes. Ian Bedloe is a young man who gives up his future to raise the children of his brother Danny and Danny's wife Lucy. He does not do this out of love for the children, for he barely knows them, but out of guilt.

Ian blames himself for their deaths. He tells Danny that Lucy is cheating on him, and Danny runs his car into a wall. Lucy then overdoses on sleeping pills leaving her two children from a previous marriage and the baby she is passing off as Danny’s orphaned.

Ian turns to religion for answers. He stumbles upon the Church of the Second Chance. which is located in an abandoned storefront. It is in this church that he seeks answers. He is told he will find redemption in taking care of the children. Ian throws himself into this with no thought of himself and his former life. This life is a lonely one that alienates him from his friends and his girlfriend. He struggles to become a better man to relieve the guilt that he feels.

The knowledge that Lucy was not cheating on Danny makes him question himself. He remains faithful to the church for he feels that only there will he be relieved of the guilt he feels. By sacrificing his life to care for the children, he seeks salvation for the deaths of their parents. In so doing, he allows the children to grow in a stable environment and find success and love in their own lives. In return, they attempt to help him find someone to share his life.

The children ( Agatha, Thomas, and Daphne) love Ian as their father. They want to see him happy, but they see how he struggles without success to meld his past life with the present Agatha blames Ian's religion for this and rebels against it. Thomas remains faithful to his religious teachings even as he leaves home and begins a life on his own. Daphne is like her mother and manipulates the religion to fit into what she wants to do.

Once the children are grown, Ian finds someone he loves and marries her. Rita joins the church and becomes a part of the life that Ian finds very important. She is a good influence on him and the family is happy with his choice.

The birth of his own child makes Ian see that his redemption is up to him. Only he can forgive himself for the guilt he feels. His religion gives him a sense of community and the ability to handle the situation day by day, but ultimately he must let go of the guilt and live his own life.

More summaries and resources for teaching or studying Saint Maybe.