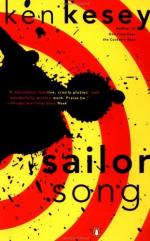 Ken Kesey
This Study Guide consists of approximately 32 pages of chapter summaries, quotes, character analysis, themes, and more - everything you need to sharpen your knowledge of Sailor Song.

Set in the near future, this novel follows the adventures of Ike Sallas, previously known as the Bakatcha Bandit. A famous social activist, Ike settles into a quiet life in a small Alaskan fishing village. The peace and quiet is upset by the arrival of a film crew led by Nick Levertov, an angry albino returned to seek revenge in his hometown. The production of the film brings out the worst in the town until all is made right again by the tirades of Mother Nature.

Ike Sallas came to public attention as the Bakatcha Bandit when he sprayed sewage over carnivals as a protest against the chemicals that gave fatal birth defects to his daughter. The stunts get him put in prison but also attract a large following of fans and supporters. After years in the social activist circuit, Ike retires to Alaska, where he seeks to carve out a simple life as a fisherman.

Ike's boss, Alice Levertov Carmody, has had a difficult life. Alice is a talented artist who is raped by her father while she is in high school. Her son, Nick, is an albino. Alice leaves him in foster care to pursue her art career. Her return to Alaska marks a change in her life. She sets up a hotel where she meets her husband, Mike Carmody. Mike leaves to buy a new boat and comes back with a new girlfriend, Willi. At first Carmody is upset, but eventually realizes her true feelings are for Ike.

Alice's son, Nick, arrives with the Foxcorp film crew to begin production of the film version of the children's book, Shoola and the Sea Lion. Nick is anxious to show the town how rich and powerful he has become. Ike recognizes Nick from his days in prison, when both of them served time together. Nick remembers Ike as well and marks him as one of many people that he wants to take revenge against for the problems he has had in his life.

Foxcorp, of course, has other plans for the small Alaskan seaside town. They want to turn it into amusement park. The townspeople squabble about how to divide the profits from the amusement park. Ike returns from a fishing trip to address the town and convince them not to sell out to the corporation. Ike's advice falls on deaf ears and the town pushes forward with its plans to turn itself into an amusement park. Ike leaves the meeting feeling defeated and rejected.

The plans for the amusement park are put on hold because of the strange weather patterns forming in Alaska and all over the world. Ike responds to the emergency call from his friends who are trapped in a strange storm. Though he is able to take them to safety, the storm sweeps Ike out to sea in his lifeboat. When he finds land again, he wanders in the fog until he sees the fireworks that have been set off in the town. He follows the lights to a reunion with Alice.

More summaries and resources for teaching or studying Sailor Song.