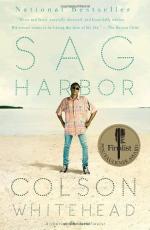 Colson Whitehead
This Study Guide consists of approximately 22 pages of chapter summaries, quotes, character analysis, themes, and more - everything you need to sharpen your knowledge of Sag Harbor.

This detailed literature summary also contains Topics for Discussion and a Free Quiz on Sag Harbor by Colson Whitehead.

Sag Harbor by Colson Whitehead is a coming of age story set in 1985. In this novel, the narrator, Benji, is fifteen and spending the summer in his family's beach house on Sag Harbor. Benji is at an age at which he is still struggling to understand the person he is and the man he will one day be. This novel is a nostalgic story of one young man's search for an identity that is filled with colorful language and humor that will leave the reader laughing as they examine their own struggles with identity.

Benji and his brother are in the car before dawn, driving down to their summer house at Sag Harbor. Life in New York is so much different from life at Sag Harbor that the boys are looking forward to the freedom and excitement that comes with being on the beach with kids with whom they have grown up since infancy.

Benji and his brother, Reggie, spend the first afternoon walking around, checking out who is out and who is not coming this summer. They run into their friend, NP, and spend the afternoon running around with him. A short time later, after Benji's parents have gone back to the city for work, they hang out at their house and discuss how they plan to spend the summer. A boy on the fringes of their group, Randy, has gotten a car. This makes Randy the hero of the summer, driving the boys to places they could not reach on foot or on their bikes. This afternoon they spend the day at a more distant beach, searching for the fabled girls who sunbathe with their tops off.

Benji decides to get a job at the local ice cream parlor in order to help pay for food while their parents are gone. The parlor is owned by a Dominican man who owns several other parlors in the area. The boys spend a great deal of time debating whether or not the owner is black because of his penchant for hiring young black boys and his way of bossing them around, including a pat on Benji's head he gave once in congratulations of a job well done. Benji gets back at the owner by leaving the freezers open during a blackout only to learn the following year the owner is indeed black, making his attitude acceptable.

A BB gun fascination washes over Benji's friends. Several of the boys buy the guns, shooting at targets in their backyards and the woods around the beaches. One afternoon, bored, the boys decide to have a BB gun war. It is all planned out and rules are made, including the thought that they should not shoot at the face and the rifle belonging to Randy should not be pumped more than twice. However, Randy fails to heed these rules and shoots Benji beside the eye, causing the BB to be lodged in his face for the rest of his life.

Later in the summer, a big concert is planned at a local night club. The boys are all too young to go to the club, but they all scheme in their own ways to go. Benji buys a ticket and plans to dress like his white school mates back in New York in order to convince the bouncers that he is old enough to go inside. The schemes of his friends are busted when they try to get inside with a couple of cousins as their dates, but Benji later gets in with no trouble with his friend NP.

A young girl from Benji's past comes back to Sag Harbor years after her father and mother's problems cause them to sell their family home on the beach. The girl is dating Benji's friend, Nick, but constantly makes remarks that remind Benji of their shared childhood memories. One night Benji takes the girl to his family's old house, one that once belonged to his grandparents just as the one where they currently stay did. However, this house was given to an aunt of Benji's, forcing his family out. Benji continues to have good memories of this house, however; therefore it seems logical that his first kiss would take place there as well.

Finally, the end of summer arrives. Benji attends the Labor Day party and looks around, wondering about the generation behind him and the one in front. Benji wonders who he will be in the future, assured that Sag Harbor will remain a part of his life.

More summaries and resources for teaching or studying Sag Harbor.