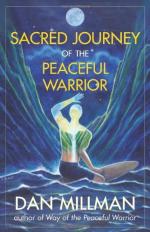 Dan Millman
This Study Guide consists of approximately 41 pages of chapter summaries, quotes, character analysis, themes, and more - everything you need to sharpen your knowledge of Sacred Journey of the Peaceful Warrior.

This detailed literature summary also contains Topics for Discussion and a Free Quiz on Sacred Journey of the Peaceful Warrior by Dan Millman.

Sacred Journey of the Peaceful Warrior is a novel about how Dan Millman realizes his destiny to integrate the Three Selves and ascend to the spiritual level in the Tower of Life. Dan's guide is an ancient-but-young Hawaiian shaman, who urges him to deal with what is directly before him and wait for Spirit to show him The Way. Through often harrowing "revelatory visions," Dan experiences the substance of Mama Chia's teachings and attains oneness with Spirit and the universe.

Feeling like a failure, Dan Millman seeks spiritual rebirth. In Hawaii, he meets Ruth Johnson, who may be his shaman, nearly perishes on a surfboard in the Pacific, and is nursed back to health on Molokai Island by Ruth, who goes by the name Mama Chia. When Dan recovers his strength, Mama Chia puts him in touch with the Three Selves: Basic, Conscious, and Higher, all part of a secret teaching about which few people seem to care.

Mama Chia helps Dan experience his destiny by clearing out the lower floors in the Tower of Life (corresponding to the Hindu chakras). The critical step is the "great leap" between the third and fourth floors, which activates the heart. Dan must develop "eyes to see" and "ears to hear," go easier on himself, and wait for God's time. Mama Chia has premonitions of her approaching death, but she is determined to live until she dies. He finds his heart among the lepers at Kalaupapa. Tens of thousands of "peaceful warriors" walk the earth, like Dan, looking for where they fit in. He will become their teacher.

Knowing she is dying, Mama Chia prepares Dan for his next master, but "House Rules" forbid simply handing out the name and address. It must be found in Dan's "Inner Records," the "universal consciousness" or "journal of Spirit," where everything is written. On a spiritual treasure hunt, Dan understands the mystery at the moment he realizes Mama Chia is dying. He arrives too late to say goodbye. After the funeral, Dan's heart opens and his mind grows silent. He undertakes a 21-day retreat and fast, achieving "clairvoyant sight," visiting other worlds and dimensions. He sees the three selves merge into his own body and ascends into Spirit. Dan believes that everyone trapped in solitude will feel the love and support of Spirit if they open the eyes of their hearts. Seeing that his journey must next take him to Japan or elsewhere in Asia, Dan sails off to set his affairs at home in Ohio before continuing his spiritual quest.

More summaries and resources for teaching or studying Sacred Journey of the Peaceful Warrior.