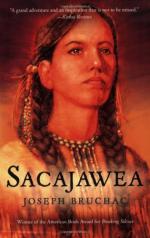 Plot Summary
+Chapters Summary and Analysis
Prologue, Chapter 1 - The Camp by the River through Chapter 5 - Stories Up The River
Chapter 6 - Looking for Indians through Chapter 9 - The White Men's Fort
Chapter 10 - Firstborn through Chapter 14 - Near Disasters
Chapter 15 - Difficulties Through Chapter 19 - What Do You Call Us?
Chapter 20 - Finding the Shoshones to Chapter 25 - Quamash
Chapter 26 - Many Rapids, Many Nations through Chapter 31 - Deep Snow
Chapter 32 - Five Fingers Parted through Chapter 35 - The Final Word and Author's Note
Characters
Objects/Places
Themes
Style
Quotes
Topics for Discussion
Order our Sacajawea Study Guide

Joseph Bruchac
This Study Guide consists of approximately 34 pages of chapter summaries, quotes, character analysis, themes, and more - everything you need to sharpen your knowledge of Sacajawea.

The Bitterroot Mountains are a small spur range of the Rocky Mountains; they run along the border of Montana and Idaho. The mountains were the area of Lewis and Clark's crossing of the Rocky Mountains and provided the most difficult terrain encountered by the expedition. The lack of game or other food, the lack of forage, and the rocky, freezing terrain made both the east-to-west and the return west-to-east passages miserable and dangerous.

The major drainage route of the Northwest United States and British Columbia, the Columbia is the largest river flowing into the Pacific Ocean from the Western Hemisphere. The Columbia River was one of the principle destinations of the Lewis and Clark Expedition and forms the setting of about one third of the novel.

A theoretical line along elevated terrain which forms the border between the two great watersheds of...

More summaries and resources for teaching or studying Sacajawea.