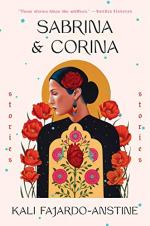 Kali Fajardo-Anstine
This Study Guide consists of approximately 28 pages of chapter summaries, quotes, character analysis, themes, and more - everything you need to sharpen your knowledge of Sabrina & Corina.

The following version of this book was used to create this study guide: Fajardo-Anstine, Kali. Sabrina & Corina. One World, 2019.

The novel is told in first-person.

An eighth-grade girl named Sierra plays with some boys from her class when she returns home to find that her mother, estranged for three years, has returned. She is unwilling to forgive her mother for her disappearance and struggles, with the help of her father, to allow her mother to try and fix their relationship. Sierra and her mother discover the beauty of their native Colorado while Sierra takes care of a pretend baby for a school project, allowing them to think about motherhood, abandonment, and life.

Corina learns that her beautiful cousin, Sabrina, died of strangulation. She returns home to mourn with her family and make funeral preparations. Corina remembers how misunderstood her cousin was and wishes that she could have done more to steer her away from drugs and alcohol.

Doty Lucero and her sister Tina live together in a small apartment while working as receptionists. Tina encourages Doty to begin dating a young man named Joey as she herself gets engaged to her boyfriend, Randy. On a night after drinking and dancing, Doty and Joey get into an altercation and he hits her, blinding her.

Clarisa and her mother pick up Clarisa's half-brother, Joey, from his drug-addicted mother's apartment and attempt to integrate him into their family. Joey, however, brings lice and all of the women in the house must eventually shave their heads, leading to turmoil. Clarisa is constantly jealous and resentful of Joey's presence until she realizes how much she would have loved him if she had always known him and never felt like she had to compete for their father's affection.

Cora and Alejandra's mother is in home-care for her cancer while their father struggles to make enough money to keep them afloat. The girls hatch a plan to steal their mother away from her caretaker and return her to their home. They fail, and their father runs out of money and must bring her back home anyway.

Pearla shoots and kills a young man who breaks into her apartment and attempts to rob her. Pearla also mourns her daughter Mercedes and allows her granddaughter, Alana, to push her to begin living in an assisted residential facility after the shooting. Pearla sees the beauty in her life and agrees to enter the facility.

After a violent confrontation with a married man she had been sleeping with, Liz moves back home to live with her mother. Her mother urges her to turn her life around and find a purpose that she can be proud of. Liz meets a girl, Monica, on the rooftop of her apartment building, and they become friends as Liz reminisces about the violence her own father committed against her mother.

Nicole is released from prison and moves back to live with her brother and his son, Tomi. Tomi's mother, Natalie, left her family and moved in with another man. Cole bonds with Tomi and eventually has a violent confrontation with Natalie. Cole's brother, Manny, promises Cole that he forgives her and wants to keep her out of trouble.

Neva's mother moves the two of them away from Neva's grandmother out to California. She begins sleeping with her landlord, Casey, while struggling financially and emotionally. Neva dislikes Casey and worries for her mother who uses drugs and alcohol to cope with her troubles. After one too many disappointments, Neva walks away from her mother and Casey.

Michael works at a marijuana dispensary while carrying on a relationship with Alicia, a married woman. Alicia discovers her pregnancy and begins the abortion process without ever telling her husband. When Michael realizes that he and Alicia will never be able to share the life that he dreamed of having, he tells her that he cannot see her anymore.

Ana waits for her boyfriend, Clifton, to return to the apartment that they share while struggling with her college classes. Ana's mother provides support and strength for her, and Ana begins to suspect that Clifton has died while her mind wanders through the happy memories that they shared.

More summaries and resources for teaching or studying Sabrina & Corina.