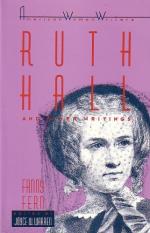 Fanny Fern
This Study Guide consists of approximately 53 pages of chapter summaries, quotes, character analysis, themes, and more - everything you need to sharpen your knowledge of Ruth Hall and Other Writings.

Ruth Hall and Other Writings Summary & Study Guide includes comprehensive information and analysis to help you understand the book. This study guide contains the following sections:

This detailed literature summary also contains Topics for Discussion and a Free Quiz on Ruth Hall and Other Writings by Fanny Fern.

Ruth Hall by Fanny Fern is a fiction novel that closely resembles the real life of the author. It is divided into ninety short chapters and, as the author states in the preface, this work does not follow the conventional rules of novel writing in 1855. The story follows the life of Ruth Hall, a woman who becomes a widow at a very young age and is forced to create a life for herself and her children that defies the conventional rules of society.

The story begins on the eve of Ruth's wedding day. She is excited and apprehensive about what the future holds. Ruth and Harry marry and move in with Harry's parents, Dr. and Mrs. Hall, until they can afford a home of their own. Harry's parents immediately dislike Ruth—particularly Harry's mother, who is jealous of anyone who competes for Harry's attention.

The young couple's first daughter, Daisy, is born, and soon they have enough money to move into their own home. They live an idyllic life in the country, until Daisy tragically dies of the croup. The couple moves away from the memories of their little girl, and they have two more daughters, Katy and Nettie. Then, Harry unexpectedly dies of typhoid. Ruth is left alone with two little girls and very little money.

Immediately, Ruth's father, Mr. Ellet, and her in-laws, Dr. and Mrs. Hall, fight over who should take care of Ruth and the girls. Neither family wants to take responsibility. They agree to each pay a small amount of money for a short time so that they will look good in the eyes of their respective churches.

As the days and months go by and the money continues to dwindle, Ruth's situation becomes dire. She tries desperately to find employment, but no one will hire her for lower-class jobs, because she comes from an upper-class family with a particular reputation. Then, Ruth is tricked into letting Dr. and Mrs. Hall take her older daughter Katy to live with them. Ruth and Nettie end up nearly starving in a miserable room in a boardinghouse in the lower part of the city, but then Ruth gets an idea: she could write for the papers.

Ruth goes to almost every paper in town with samples of her writing, and finally two papers take her on at very low salaries. She works day and night to meet her deadlines, and the popularity of her stories grows. Ruth becomes a bit of a celebrity, but she goes by the penname "Floy" so no one except for the editors know that she is the author of the columns.

Even though Ruth is gaining notoriety, she is still on the brink of economic disaster and barely has enough to feed herself and her youngest daughter Nettie. Then, she receives a letter from Mr. Walter, the editor of a prominent paper. He offers her a year contract with a much higher salary if she agrees to work exclusively for his paper. Ruth takes his offer and finds out as she gets to know Mr. Walter that the other editors were quite unscrupulous.

Ruth's financial situation is getting better every day, and then three different publishers offer her book contracts. Ruth goes with a publisher that allows her to keep the copyright to her book, and she becomes a very wealthy woman when the book is a best-seller. Ruth rescues Katy from her horrible grandparents and takes her daughters to live in another part of the country in comfort and happiness.

Ruth Hall shines a glaring light on hypocrisies in nineteenth-century society and particularly the double standards that career-minded, single women faced. Ruth is assaulted by hypocrites and by fate itself, but she saves the day by using her own intelligence—getting a job as a writer so that she can become financially independent. There is no knight in shining armor that swoops in to marry Ruth and take care of her for the rest of her life. Ruth saves herself. This was a borderline radical feminist concept in the 1850s.

Ruth Hall is a sentimental and satirical story; it is both modern and dated; and it is a frank portrayal of the challenges women faced when they did not fit squarely into 19th century society.

More summaries and resources for teaching or studying Ruth Hall and Other Writings.

Ruth Hall and Other Writings from BookRags. (c)2022 BookRags, Inc. All rights reserved.