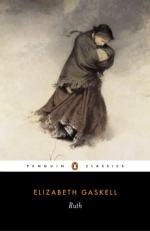 Elizabeth Gaskell
This Study Guide consists of approximately 76 pages of chapter summaries, quotes, character analysis, themes, and more - everything you need to sharpen your knowledge of Ruth.

The following version of this book was used to create this study guide: Gaskell, Elizabeth. Ruth. 1853. Oxford University Press, 1998.

Using an omniscient, third person narrator in the past tense, Gaskell introduces us to Ruth Hilton: a beautiful young orphan living with and working for a seamstress after her parents’ death. A series of unfortunate circumstances lead Ruth’s employer and guardian to wrongly believe that Ruth, innocent and pure, has been seduced by a local gentleman, Mr. Bellingham. As a result, Ruth is fired, expelled from her home, and left at the mercy of Mr. Bellingham. Without anywhere else to turn, Ruth accompanies Mr. Bellingham on a journey far from her home where they begin a sexual relationship.

After just a week together, Mr. Bellingham becomes ill. By now in love and completely dependent on Mr. Bellingham, Ruth cares for him until his mother arrives and unceremoniously dismisses her. Ruth is now alone with nowhere to turn. While contemplating suicide, Ruth comes across a kind minister, Mr. Benson, who is staying at another inn nearby. Mr. Benson rescues her from her suicide attempt and takes her in, soon discovering that Ruth is pregnant.

With the blessing of his sister, Faith, Mr. Benson decides to bring the pregnant Ruth back to his home in England to live with them. Led to believe that she is the widowed cousin (called Mrs. Denbigh) of Mr. Benson and Faith, the community of Eccleston welcomes Ruth and her son, Leonard, after he is born. Ignorant of her past, Ruth and Leonard quickly become beloved and respected members of the community. Ruth gets a job as governess to Mary and Elizabeth Bradshaw, the youngest daughters of a prominent local businessman. Through this work, Ruth proves that she is kind, intelligent, and a force of good for all who come into contact with her, in spite of her secret shame.

Approximately ten years after her arrival in Eccleston, Mr. Bellingham, now called Mr. Donne, appears in town and recognizes Ruth. Motivated by guilt and desire, Mr. Donne begs Ruth to marry him and allow him to care for their son. She declines both proposals, explaining that she is no longer in love with him and does not want their son to be influenced by Mr. Bellingham/Donne’s immoral character. Soon after, a gossiping shopkeeper recognizes Ruth from her younger days. Knowledge of Ruth’s true past as a fallen woman and mother of an illegitimate child begins to spread through Eccleston, eventually reaching her employer, Mr. Bradshaw. Though Jemima, her pupil, attempts to stand up for Ruth, her father is enraged when he discovers the truth. Ruth is fired from her job and the town shuns her, Leonard, and the Bensons.

Though reeling from the loss of respectability and income, the Bensons stand by Ruth and Leonard. In spite of Mr. Benson insistence that the family can make due without Ruth’s income, Ruth is determined to work. Unable to get a more respectable, safer job, Ruth becomes a nurse to Eccleston’s poor. Over time, Ruth proves that she is a skilled and talented nurse and eventually regains some semblance of respectability; she becomes a highly sought after nurse for patients across social classes.

Meanwhile, Mr. Bradshaw, Ruth’s harshest critic, is forced to reexamine his moral rigidity. Mr. Bradshaw discovers that Richard, his oldest son, has stolen Mr. Benson’s life savings, invested through the Bradshaw company, in order to pay gambling and drinking debts. Upon learning this, Mr. Bradshaw disowns his son and unsuccessfully begs Mr. Benson to prosecute him. However, after Richard is almost killed in an accident, Mr. Bradshaw softens, forgiving Richard first and later Ruth as he begins to rethink his overly rigid moral code.

Ruth continues to nurse Eccleston’s sick, regaining some of the social status she lost, when a virulent typhus epidemic breaks out. Ruth becomes one of the few medical providers willing and able to care for the sick. In spite of the danger of catching the disease, Ruth emerges unscathed from her stint in the typhus wards only to be infected when Mr. Bellingham/Donne becomes ill. Ruth insists on caring for the man who ruined her life. She nurses him back to health then contracts the disease and tragically dies, fully redeemed in the eyes of her community. Before her death, though, a physician who worked with Ruth, and also an illegitimate child, offers to act as a father to Leonard and provide him with a surgical apprenticeship. The whole community mourns her death, all agreeing that Ruth was good and pure despite her fallen status.

More summaries and resources for teaching or studying Ruth (BookRags).