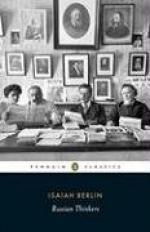 Isaiah Berlin
This Study Guide consists of approximately 34 pages of chapter summaries, quotes, character analysis, themes, and more - everything you need to sharpen your knowledge of Russian Thinkers.

This detailed literature summary also contains Topics for Discussion and a Free Quiz on Russian Thinkers by Isaiah Berlin.

Russian Thinkers is a collection of essays by the famed British political philosopher and professor or Russian studies, Isaiah Berlin. The essays appeared in various journals from the 1940's through the 1960's. The essays, collected and edited by Russian scholars Henry Hardy and Aileen Douglas, focus on the history and thinking of the major Russian thinkers, social theorists, critics and novelists of the nineteenth century. They range from novelists such as Leo Tolstoy, Feodor Dostoevsky and Ivan Turgenev, to critics and aesthetes such as Vissarion Belinsky, to agitators such as Mikhail Bakunin and populist revolutionaries such as Nikolay Chernyshevsky.

Berlin draws attention to overlooked Russian writers and thinkers, or to overlooked themes in the work of well-known writers. The book includes his most famous essay, "The Hedgehog and the Fox," which addresses Leo Tolstoy's philosophy of history as revealed in his great historical novels, especially War and Peace. The distinction Berlin draws, between "hedgehogs," who know "one big thing" and "foxes," who know "many different things" (borrowed from a fragment of the Greek philosopher Archilocus), is, in fact, central to most of the essays in this book and to Berlin's thinking as well. Berlin sees the conflict between the "fox" (like love of concrete reality and the details of real life) and the "hedgehog" (like love of grand overarching visions and goals) as central to Russian intellectual life in the nineteenth century. Berlin's favorite writers and thinkers, such as Turgenev, Herzen and Tolstoy, live with the unresolvable conflicts between these and other values, such as individualism vs. collectivism. They mostly refuse to succumb to the temptations of trying to find false solutions or to escape in revolutionary action or Utopian schemes, in contrast to revolutionary agitators such as Bakunin or populists such as Chernyshevsky.

In fact, tension between "foxes" and "hedgehogs" runs throughout Russian culture, not just Russian writers. The destructive critics of the 1860's and 1870's, as embodied in Turgenev's "nihilist" Bazarov, were "clearing the ground" for some new social reality, although many of them could not say what that would be. Of course, we readers in the twenty-first century know that the Communists erected the Soviet Union in 1917, an awareness that forms the necessary background of all these essays. The tension between foxes and hedgehogs may be an inescapable tension in human existence itself. Berlin's liberal humanism, like that of Herzen and Tolstoy, consists in part of acknowledging suffering in the face of human problems that can't be solved, while maintaining a commitment to social justice, equality and progress despite difficulties and setbacks. This is the central theme he probes in the work of the Russian thinkers and writers he uncovers and explores.

More summaries and resources for teaching or studying Russian Thinkers.