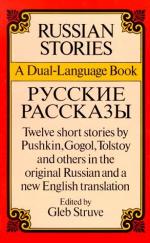 This Study Guide consists of approximately 34 pages of chapter summaries, quotes, character analysis, themes, and more - everything you need to sharpen your knowledge of Russian Stories.

This detailed literature summary also contains Topics for Discussion and a Free Quiz on Russian Stories: A Dual-Language Book by .

Alexander Pushkin (1799-1837) was born in Moscow. Pushkin was educated at the Lyceum at Tsarskoye Selo and published poetry as early as 1814. In modern times, Pushkin is widely hailed as one of Russia's greatest literary figures—"One Russian nineteenth-century critic called him 'Our all.'" (p. 2)—and is generally remembered best for his poetry. Pushkin's numerous publications include a vast body of lyrical poetry, several lengthy narrative poems including "The Bronze Horseman", a novel in verse, a historical drama, four dramatic tragedies, several short stories, and the novella "The Queen of Spades". The Pushkin story in the current collection was originally published anonymously in 1830 in the collection entitled The Tales of Ivan Petrovich Belkin. Pushkin stated that in prose he valued "brevity, precision, and naked simplicity" (p. 3) and these qualities are evident in the story presented in the current collection. Pushkin died of wounds received dueling in defense of his wife's honor.

Nikolay Vasilievich Gogol-Yanovsky (1809 - 1852) was born in Sorochintsy into a family of Ukrainian Cossack gentry. He was educated at the Lyceum at Nezhin, worked in the civil service, and taught history at various postings. His early attempts at publication were frustrating and led to an early move to Lubeck. He published his first successful works in 1831 and in 1836 published his comedy Revizor. From c. 1836 to c. 1848 Gogol lived outside of Russia, and toward his death he suffered a prolonged religious and moral crisis. Gogol remains one of the most enigmatic and controversial figures in Russian literature. Gogol's The Nose was rejected for publication as "'common' and 'filthy'" (p. 31) before appearing in a magazine edited by Pushkin where it was characterized as a nonsensical joke. Modern criticism tends to view the story with a variety of interpretations.

Ivan Sergeyevich Turgenev (1818-1883) was born into a wealthy family in the Province of Oryol. He studied philosophy in German and contemplated becoming a university professor before selecting a literary vocation. He published first in 1847 and within five years was arrested, detained, and banished to his ancestral estate—ostensibly for penning an obituary of Gogol. From 1855 onward, Turgenev spent most of his time abroad, primarily in Europe, and maintained an intimate contact with various famous literary persons. He wrote six novels, numerous short stories, and other pieces. Turgenev's work is free of most sentiment, and he is often described as a poetic realist. In a letter to a friend, Turgenev claimed the incident reported in A Living Relic was based on a true episode.

Feodor Mikhailovich Dostoevsky (1821-1881) is one of the best-known Russian writers of all time. The story Bobok first appeared in 1873 and was written immediately after Dostoevsky's nonumental work The Demons. The story presents a fusion of monologue and dialogue and adequately portrays Dostoevsky's personal style. As Dostoevsky is so well-known, the current book provides little biographical data about him.

Count Lev Nikolaevich Tolstoy (1828-1910) is one of the best-known Russian writers of all time. The story The Three Hermits first appeared in 1886. The story adequately portrays Tolstoy's latter work and style. As Tolstoy is so well-known, the current book provides little biographical data about him.

Nikolay Semyonovich Leskov (1831-1895) was born in the Province of Oryol. He was orphaned at age sixteen and thereafter split his time between earning a livelihood and gaining an education. Leskov traveled widely for employment and was exposed to much of Russian life including an easy familiarity with Russian peasant life. Leskov entered literature late and through journalism, publishing his first story in 1863. His first novel was published in 1864 and proved controversial. Ostracized by influential critics, he was nevertheless popular with readers. The Clothesmender demonstrates Leskov's predilection for wordplay and linguistic pranks, and reads as an extended anecdote.

Anton Pavlovich Chekhov (1860-1904) was born in Taganrog, on the Sea of Azov, to a poor family; his grandfather had been a serf. Chekhov studied medicine at the University of Moscow, received a medical degree, and briefly entered into practice. During his education, he made his living selling sketches and stories to various magazines. Chekhov's literary career continued to expand under the attention of Dmitry Grigorovich and Alexey Suvorin. By 1902 Checkhov had published numerous volumes of short stories and by 1903 he had published five major plays and several minor plays. Today, Chekhov is rated as one of the all-time great writers of short stories and his influence has been especially evident in England. The story Sleepy is an example of realistic impressionism and was written in 1888. Chekhov died of tuberculosis.

Feodor Kuzmich Teternikov (1863-1927) wrote under the pseudonym Sologub. He was born in St. Petersburg to a poor but artistic family. He graduated from a Teacher's College and worked as a schoolteacher, eventually rising to superintendent of elementary school. He published several novels between 1896 and 1912. In addition to novels and short stories, he also wrote and published poetry and was influential in the Russian Symbolism movement. Much of his work postulates a dual nature composed of God and evil. The characters in In Bondage are strange children, characteristic of much of his work. After the suicide of his wife he became a recluse and published little new material.

Ivan Alexeyevich Bunin (1870-1953) was born south of Moscow to a landed but impoverished family. He led a life of literary exploration, writing both verse and prose; today he is remembered primarily for his prose. His publications gained prominence c. 1910 and continued to increase in prominence through at least 1930. In 1919, Bunin emigrated to France and spent the remainder of his life in exile. Some of his seminal works were written in exile. Bunin held great respect for Tolstoy and was somewhat influenced by that writer. Wonderment, love, and death are common themes in Bunin's work. He won the Nobel Prize for Literature in 1933, the first Russian writer to be so honored. He died in Paris and, since c. 1956, his works have been republished in Russia.

Evgeny Ivanovich Zamyatin (1884-1937) was born in Lebedyan, Central Russia; a town featured in Turgenev's writing. He received his higher education in mathematics and engineering at the Department of Naval Engineerng of the Polytechnic Institute in St. Petersburg. During his student days he was imprisoned for political activism, and was again imprisoned in later life. He first published in 1911 and in the next few years was politically prosecuted for some of his works. During World War I, Zamyatin worked as an engineer. During his life he produced a few volumes of stories, four plays, two novels, and a volume of essays. In 1931, due to political hazing, Zamyatin emigrated to France and settled in Paris where he died.

Isaac Emmanuilovich Babel (1894-1941) was born in Odessa in a working Jewish family. In early life he studied Hebrew and the Talmud, and developed an early enthusiasm for French literature and language. His first stories were written in French though his first publications, during 1916, were in Russian. Babel worked in a variety of trades and places during his early literary development, until he became prominent c. 1924. Babel wrote two volumes of stories, a handful of uncollected stories, and two plays. During the 1930s Babel faced political hazing. He was arrested in 1939 and died in prison during 1941. Babel was politically rehabilitated in 1957. Babel's The Death of Dolgushov is characteristic of his terse style.

Mikhail Mikhailovich Zoshchenko (1895-1958) was born in Poltava. He studied at the Law School of the University of Petrograd but did not graduate, enlisting in 1915 as a volunteer. Zoshchenko's first literary output commenced in 1921 and his first collected volume was published in 1922. Through the 1920s and 1930s, Zoshchenko was enormously popular in Russia and was also widely appreciated abroad. But in 1946 he was politically denounced and his works suppressed. He was, ultimately, expelled from Russia, and his literary output suffered remarkably. Yuletide Story was written in 1926.

More summaries and resources for teaching or studying Russian Stories: A Dual-Language Book.