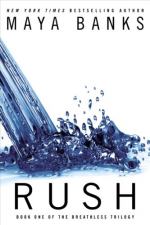 This detailed literature summary also contains Quotes and a Free Quiz on Rush (The Breathless Trilogy) by Maya Banks.

Rush, a novel by Maya Banks, is part of the author's Breathless Trilogy. It is a story of a wealthy, successful man who insists on dominating the women in his life in every sense of the word and how he finally learns to open his heart to love.

Mia Crestwell is the much-younger sister of Jace, who has protected and taken care of her since their parents died many years ago. Jace's two best friends and business partners, Gabe and Ash, have watched Mia grow into a beautiful young woman. When Gabe sees her at a social event, he decides that he must possess her. He presents her with a thick contract that would give him complete control over every aspect of her life, including very graphic and demeaning sexual acts. After thinking it over, Mia, who has not carved out a career for herself and is drifting through life, agrees to the unusual arrangement. They agree that her brother and Ash can never learn about it.

The relationship proceeds, with Gabe demanding constant sex that he alone controls. He makes her his administrative assistant so he can have access to her at all times. He is kind to her in some ways, buying her a new wardrobe and providing a car and driver to take her everywhere.

As their relationship proceeds, Gabe finds himself becoming obsessed with Mia. He begins to have tender feelings toward her that he did not expect. When his ex-wife suggests that he has been in love with Mia for a long time, he becomes upset about the idea of losing the careful control he prides himself on, leading to a terrible mistake. Their contract stipulates that Gabe can share Mia with other men if he chooses, and while they are on a business trip to Paris, he decides to exercise that clause to prove to himself that he does not have feelings for her. He ties her hands and feet, then forces her to have oral sex with him while three business associates watch, then he ties her to a coffee table and allows them to touch her sexually. Just as he is about to change his mind, he hears her scream for him as one of the men tries to force his penis into her mouth and slaps her when she refuses. After throwing the men out, Gabe apologizes profusely but sees by Mia's vacant stare that she might never forgive him. However, she does forgive him after making it clear that she expects there to be no other people in their relationship and he agrees.

Back in New York, Mia is shocked when the man who attacked her approaches her on the street and shows her graphic photos taken of the incident. He threatens to publicize them if she does not get information on the bids his competitors submit, but after much soul-searching, she tells Gabe the whole story. He is touched that she did not betray him; so, he takes care of the problem.

Gabe finally begins to give in to his feelings for Mia and they agree to tell her brother about their relationship so they can bring everything into the open. Unfortunately, just hours before they plan to tell him, Jace and Ash walk in on another bondage situation in which Gabe is spanking Mia with a crop and Jace begins to beat him up. Mia is shocked when Gabe refuses to explain the situation to her brother and Ash, but instead coldly tells her their relationship is over. A few days later, Gabe confesses to Jace that he is in love with Mia and wants to marry her. After he convinces him of his sincerity, Jace agrees.

After pursuing an angry Mia for a few days with no success, Gabe enlists Jace and Ash to bring her to the Christmas tree at Rockefeller Center, a place with great meaning for her, and he proposes to her in front of a large crowd of people. Mia accepts and the story ends with the two of them agreeing that they will go home and work on starting a family.