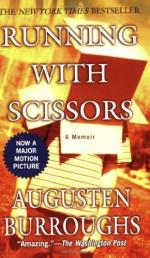 Augusten Burroughs
This Study Guide consists of approximately 28 pages of chapter summaries, quotes, character analysis, themes, and more - everything you need to sharpen your knowledge of Running with Scissors.

This detailed literature summary also contains Topics for Discussion and a Free Quiz on Running with Scissors by Augusten Burroughs.

In Running with Scissors, Augusten Burroughs tells the story of his adolescence. The memoir begins with the end of his parents' marriage. Due to Augusten's mother, Deidre, suffering from mental illness, the marriage falls apart. Deidre also seeks therapy from one Dr. Finch.

Dr. Finch and his family quickly become integral in Augusten's life. The doctor advises Augusten on very personal matters in growing up, including his sexuality. Soon, Augusten moves in with the Finch family for an extended visit while his mother receives intense treatment from Dr. Finch.

Despite the doctor's extensive treatment, Deidre does not gain the mental stability that she seeks. Eventually, the stress of raising a teenage boy becomes too much for her. Without any warning, Deidre signs over custody to Dr. Finch.

For the remainder of his teen years, Augusten splits his time between the Finch household and his mother's. At thirteen years old, he "comes out," admitting first to the Finch's, then to his mother that he is gay. Through the Finch's, he meets 33 year old Neil Bookman, who quickly becomes his boyfriend. Their relationship, though, suffers from selfishness and anxiety. After two years, Neil takes a train into New York City and never returns.

Life in the Finch household causes much drama. The doctor believes that the children need much freedom to develop themselves. There appear to be few if any rules. The house, though in a nice neighborhood, remains filthy all the time. The children experiment with drugs and alcohol. They come and go as they please and speak rudely to one another and their parents.

However, Augusten feels alone and trapped in his life after a few years. He realizes that the lack of rules also leads to a lack of guidance. He longs for someone to advise him in how to act.

The member of the Finch family that Augusten become closest to is Natalie, the third daughter. Natalie encourages Augusten to apply for a part time job, though on Natalie gains employment. Eventually, Natalie and Augusten move out together and begin college courses.

Shortly after this move, Deidre confesses to Augusten that Dr. Finch sexually abused her during her treatments. Natalie refuses to believe such allegations. Due to the stress that this puts on their friendship, Augusten moves out. While living on his own, having also failed out of college, Augusten realizes that his life, though hard, prepared him for a richer life as a writer in the city. Given all he overcomes, such endeavors fail to scare him any longer.

Throughout the memoir, Augusten dreams of many careers, from hair stylist to professional singer. He resists writing, however, because that is his mother's career. He fears that writing and mental illness go hand in hand. Ironically, that is the very profession in which he succeeds.