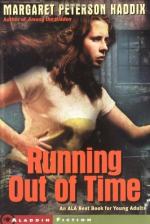 Margaret Peterson Haddix
This Study Guide consists of approximately 28 pages of chapter summaries, quotes, character analysis, themes, and more - everything you need to sharpen your knowledge of Running Out of Time.

Running Out of Time Summary & Study Guide includes comprehensive information and analysis to help you understand the book. This study guide contains the following sections:

This detailed literature summary also contains Topics for Discussion and a Free Quiz on Running Out of Time by Margaret Peterson Haddix.

Running Out Of Time by Margaret Peterson Haddix is a thriller for young adults. Jessie Keyser and other children her age believe she is living in Clifton, Indiana in 1840. A diphtheria epidemic attacks the children of Clifton and Jessie's mother is forced to reveal that the year is actually 1996. Jessie must go to the outside world to find help from a mysterious man named Mr. Neely. Ultimately, Jessie figures out a way to tell the world about Clifton and save her sick friends.

Jessie goes with her mother on a late night call to see the Bentons. Both of the Bentons' children have gotten sick. Ma tells Jessie that she should meet her at the Forbidden Rock after school tomorrow. At the end of school, Jessie's sister, Katie, has taken ill. Jessie meets her mother at the Forbidden Rock, where her mother tells her it is not 1840, it is really 1996. Clifton is watched by tourists. Medicine used to be sent to Clifton, but for some reason, is no longer sent. Jessie is shocked, but listens to her mother. Ma tells Jessie she must go to the outside world and contact Mr. Neely for help. She takes some modern clothes and makes her way through a manhole that leads to the Clifton visitor center.

Jessie gets into the center and passes the guards. She hides in the bathroom all night. The next day, she disguises herself as a modern day student and walks around with children her age. Jessie realizes that her whole life has been viewed by people she does not know. She soon makes her way outside of the tour center and out of Clifton. Jessie makes her way to a gas station where she tries to call Mr. Neely, but he does not answer. She gets to another town, Waverly, and calls him at a KFC. Mr. Neely picks Jessie up and promises to help her. He takes her to his apartment and Jessie rests. She hears Mr. Neely talking on the telephone. He says that he thinks they will have to kill Jessie. Soon other people arrive at the house, including Miles Clifton. Jessie escapes because she does not want to die.

Jessie makes her way downtown to the capitol. There, she calls her own press conference. She tells the reporters of the truth at Clifton. After the press conference, Jessie faints and wakes up in the hospital. She finds that all the Clifton children are there. Mr. Neely is actually Frank Lyle. Lyle and a group of scientists had released diseases on the people of Clifton to see who would survive without medicine.

Jessie is finally reunited with her family. They return to Clifton so that Pa can manage the property until the state figures out what to do with it. The whole family is forced to embrace the "future," but they will try to do so together.

More summaries and resources for teaching or studying Running Out of Time.

Running Out of Time from BookRags. (c)2022 BookRags, Inc. All rights reserved.