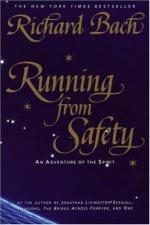 Running from Safety: An Adventure of the Spirit Summary & Study Guide

Running from Safety: An Adventure of the Spirit Summary & Study Guide Description

Running from Safety: An Adventure of the Spirit Summary & Study Guide includes comprehensive information and analysis to help you understand the book. This study guide contains the following sections:

This detailed literature summary also contains Topics for Discussion and a Free Quiz on Running from Safety: An Adventure of the Spirit by Richard Bach.

Running from Safety: An Adventure of the Spirit by Richard Bach is a philosophical book that offers insight into religion, the meaning of life and facing one's fears. Richard is a writer who frequently has angels showing up to teach him lessons in life. One day, he meets an angel who reminds him of a promise he made to himself when he was nine. He had promised himself that he would come back in 50 years to teach the boy about all he had learned in life.

When the angel disappears, the 59-year-old Richard finds himself facing a very angry, nine-year-old version of himself, Dickie, who has been locked away in time and space for 50 years. Young Dickie wants to learn about life, but not necessarily from the man who locked him away. Richard must find a way to reach the child and establish a connection. Doing so, he can learn about himself and find answers hidden in his past.

The two establish a tenuous relationship, each blowing up or running from each other at any given time. Sometimes Dickie brings forth wonderful memories that Richard can use as teaching tools. Other times, Dickie brings up painful memories, such as the death of Richard's brother, Bobby. While this is painful, Richard finds that it is helpful to view the event from an adult perspective.

Richard has an instinct to run away from anything he is getting to close to. He would rather guard his emotions. This creates a conflict as he gets to know Dickie more. Richard is torn between helping the child and strengthening their bond and running away so Dickie is blocked out of his life. Richard's wife, Leslie, is well aware of his strengths and weaknesses. She helps him along the way as Richard gets to know Dickie better.

Since they are the same person, they share the same interests, such as flying. Richard enjoys sharing the joys of aeronautics with Dickie, and Dickie helps him re-live the excitement and awe of youth. Their flying experiences bring them closer together. Once Richard and Dickie open up enough to each other and become friends, they begin sharing thoughts and philosophies. Richard teaches by encouraging Dickie to question. They discuss topics ranging from friendships to marriage, religion and death. Richard comes to the realization that Dickie can teach him some things, too.

There is a subtle change throughout the book. The older Richard relives his younger days, and Dickie learns about thoughts and situations an older individual will face. By the end of the book, the two naturally merge. As Richard opens totally to his relationship with Dickie, the boy announces that he is going to leave. Richard realizes that Dickie never really leaves. He is part of his being, and together they are the captains of their own ship.