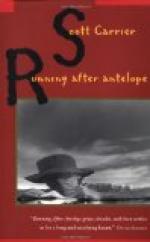 This detailed literature summary also contains Topics for Discussion on Running After Antelope by Scott Carrier.

"Running After Antelope" by Scott Carrier is the autobiographical account of his life-long fascination with the idea of running down an antelope on foot and capturing him without weapons. Counterbalancing that dream was Scott's struggle in his personal life and career and the rugged and risky life of a war correspondent in a world where weapons ruled.

Scott is six years old when he is awakened by his seven-year-old brother to go "hunting." His brother is intrigued and mystified by all creatures and captures a myriad of snakes, lizards and frogs that he finds in the area surrounding their Salt Lake City, Utah, home. His brother takes the creatures to the basement of their home and puts them in cages so he can study them. Scott's brother tells Scott that he figured out how to run farther and longer and that he feels he could run forever.

As the boys mature, Scott's brother solidifies his love of animals and becomes serious about a career in studying and researching them. The boys become intrigued by Indian tribes of yore who chased down swift-footed antelope eventually capturing them without weapons. The theory was that when man evolved to an erect stature, it allowed for a superior pulmonary system to develop. Man could not run as fast as a cheetah or an antelope but because of his erect position, his heart and lungs could out last these faster animals for a longer time and in a farther distance. Man was not as swift but he had more endurance and superior stamina. The tribesman would chase the antelopes until they were literally exhausted and collapsed. Therefore, without weapons, the Indians had captured a large antelope that could feed the entire tribe.

Scott's life went in a different direction than that of his brother. His brother went on to study animals at an academic level and pursued a doctorate degree. Much of his study was on the advantages that animals have that, like man, can breathe and run at the same time. Scott attended college but wound up unemployed for much of his youth and got into drinking and drugs. He married and had children but his career never took off and he seemed somewhat lost as to who he was and what he wanted to do. The only definitive thing he wanted to do, the only thing he seemed to have any passion for was to one day chase down an antelope on foot with his brother.

Scott drifted into becoming a writer. He was never ambitious about writing; it seemed to pursue him more than he pursued it. However, it was obvious that he had a talent and was able to secure employment although his behavior and his rebellious nature often put his career in jeopardy. Although his heart wasn't necessarily into his career, he had the opportunity to become a war correspondent for a well-known man's magazine. As it turned out, Scott was just what the magazine was looking for. They didn't want a reporter who would just report the wins and losses in a day of war, they wanted someone who would get the story behind the story. They wanted an off-beat approach to war reporting and they found the perfect off-beat person to fill that role.

Scott witnessed to the horrors of war and experienced the utter misery that is the harsh and living reality of so many suffering people around the world. Scott was dedicated to reporting their story and he risked his own life in order to do it. In between Scott's international assignments as a war correspondent, he would return to the peace and simplicity of the Utah desert where he dreamed of chasing down an antelope without any weapons.