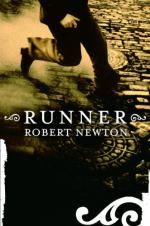 Robert Newton
This Study Guide consists of approximately 78 pages of chapter summaries, quotes, character analysis, themes, and more - everything you need to sharpen your knowledge of Runner.

The continent / country of Australia is the broad strokes, overall setting of the narrative. The colloquial and conversational language of that part of the world is an important component of the narration and dialogue.

The city of Melbourne in Australia is an important backdrop in the narrative. In his narration, Charlie makes frequent references to running into "the city" and feeling a strong connection to the sometimes seedy life there.

Richmond is a community within the boundaries of Melbourne. It is a poorer part of the area, and is the part of town where Charlie, his family, and his friends make their home.

Fitzroy is another community within the boundaries of Melbourne, bordering on Richmond. There is a sense in Charlie's narration that Fitzroy is slightly wealthier, but also significantly rougher, and more violent. As such, Fitzroy metaphorically represents the darker, seamier side of life...

More summaries and resources for teaching or studying Runner.