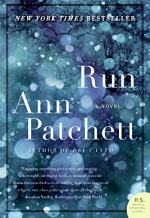 Ann Patchett
This Study Guide consists of approximately 60 pages of chapter summaries, quotes, character analysis, themes, and more - everything you need to sharpen your knowledge of Run.

The following version of this book was used to create the guide: Patchett, Ann. Run. HarperCollins, 2007.

The book opens two weeks after the death of Bernadette Sullivan Doyle, when her sisters come to her family home and demand a family heirloom, a Mother of God statue, which is supposed to be handed down to a female relative. Because Bernadette only has sons, Teddy, Tip, and Sullivan, the sisters think one of their daughters get the statue, but Doyle, Bernadette’s husband, tells them it will stay in his family.

The scene fast forwards almost fifteen-years to the Museum of Comparative of Zoology, the workplace of Tip, one of Bernadette and Doyle’s two adopted sons. He is waiting for his brother Teddy so the two can attend a political lecture where they will meet their father. Teddy is late, but the two run to the lecture and get there before it is about to begin. Neither son wants to be there, and after the lecture Tip angrily tells his father he will not attend political events any more, even though his father wants him to. While he is telling his father this he is knocked over by a woman.

The next scene reveals that the woman is Tennessee Moser, and she knocked Tip over in order to save him from getting hit by a Chevy Tahoe. Tennessee is on the ground, bleeding, and her 11-year-old daughter, Kenya, is by her side. Tennessee is brought to the hospital and Kenya follows in the police car with the Doyles. At the hospital, Tip is treated for a broken ankle, and it is revealed that Tennessee broke her hip and needs surgery. The men discuss what to do with Kenya, as she has no relatives to call, and Teddy and Tip persuade Doyle to bring her home with them. Prior to leaving, Kenya gives them surprising news, Tennessee is Teddy and Tip’s birth mother, which is why she was willing to endanger herself to help him.

The Doyles and Kenya go home and discover Sullivan, Doyle’s oldest son, already there and in a bathrobe. He has come home from a humanitarian aid trip to Africa and plans to stay in Doyle’s house for a while. Doyle brings Kenya to Tip and Teddy’s room, and she settles in for the night. Downstairs, lying on the couches, Teddy and Tip discuss Tennessee, and Tip tells Teddy he has no interest in getting to know a woman who gave him up twenty years earlier. Doyle and Sullivan discuss the matter in the kitchen, but Sullivan feigns sleepiness and goes upstairs. Once in his room, though, he cannot sleep, so he returns to the living room and talks to Tip and Teddy. He and Teddy decide to go for a walk, and once outside, Teddy tells him they are going to go to the hospital, which they do. At the hospital, they find Tennessee. They tell Tennessee they will care for Kenya, and Kenya tells them they need to let her go outside and run. Later when Sullivan finds himself alone at the hospital because Teddy has gone off to see his uncle Father Sullivan, he confesses to her the reason he left Boston and also why he ran away from Africa.

Back at the Doyle house, Kenya, Teddy, and Tip have a difficult breakfast, because none of them knows how to act toward the others. Doyle then tells Kenya he will bring her to her apartment, after which Tip will bring her running at the track. Doyle and Kenya go to her apartment to get her things, and afterwards Kenya and Tip go to the museum. At the museum, Tip and Kenya connect on a deep level with one another while playing a game with the fishes, and then Tip takes Kenya to the track, where she impresses all the other runners. Everything is going well, until, on the way back, Tip slips on the ice and is bleeding. Kenya gets help.

Back at the Doyle house, Doyle receives the phone call that Tip hurt himself, and all three Doyle men get into to a fight, because the fact emerges that Tennessee has no health insurance, and Doyle does not want to help her. Teddy sneaks out the front door while the men are waiting for a taxi to the hospital and he goes to Father Sullivan’s again, to ask him to come to the hospital to help pray for Tennessee. When they get to the hospital Father Sullivan puts his hand on Tennessee’s leg and has a supernatural premonition that she is in great physical danger and she needs a doctor to perform surgery on her to save her. The scene closes with Father Sullivan telling Teddy to run to go get help.

The novel fast forwards years later at the scene of a Johns Hopkins Medical school graduation. Tip has gone to medical school, because he wanted to atone for Tennessee’s death. During the ceremony he decides that he does not want to be a doctor and will pursue his passion for Ichthyology. Teddy, on the other hand, has decided to pursue politics, a fact that makes Doyle very happy. Kenya has been adopted by the Doyles and is now an accomplished track athlete. The book closes with Kenya going out for a late night run and trying to reach an understanding of her present state. Though grateful to be part of the Doyle family, she expresses that life now is not as good as when it was just her and her mother.