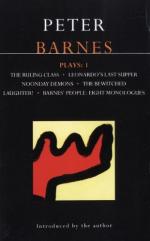 At the head of a long, formal banquet table, the Thirteenth Earl of Gurney presents a toast to England, "Ruled not by superior force or skill / But by sheer presence." As they drink, the scene shifts to his bedroom, where the Earl goes through his bedtime ritual: donning a ballet tutu and a three-cornered hat and swinging momentarily from a silk noose blithely prepared by his aged butler, Dan Tucker. Something goes wrong tonight, however, and the old Earl actually hangs himself.

Act I, scene i

The Earl's funeral is presided over by Bishop Lamptron, an asthmatic old man who appears magnificent in his stole and mitre.

Back at the family castle, the family contends over who will inherit the estate. When the lawyer announces that it will be Jack, the Fourteenth Earl, Sir Charles, brother of the late Earl, and his wife...