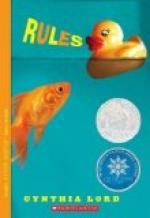 Related Topics
Touch Blue
Half a Chance: A Novel
A Handful of Stars

Cynthia Lord
This Study Guide consists of approximately 27 pages of chapter summaries, quotes, character analysis, themes, and more - everything you need to sharpen your knowledge of Rules.

This detailed literature summary also contains Topics for Discussion and a Free Quiz on Rules by Cynthia Lord.

Rules is the story of a twelve-year-old girl named Catherine, who is torn between caring for her autistic brother David and finding her own place in life.

Catherine's day-to-day life during one summer vacation is usually occupied by caring for David and trying her best to keep him out of trouble. To do so, Catherine has created numerous rules for David, such as "Say 'excuse me' after you burp" or "You can yell on the playground, but not during dinner." David has little sense of decorum or social conventions, and is easily upset by seemingly insignificant things. Catherine attends David's occupational therapy sessions twice a week, along with their mother.

Two significant events happen early in the summer. A new girl named Kristi moves in next door, and Catherine strikes up a unique friendship with Jason. Jason, who attends occupational therapy, is confined to a wheelchair, is physically deformed, and is unable to speak. Instead, he uses a book of word cards, pointing to cards in sequence to communicate. Catherine is at first intimidated and fearful of Jason's disability. On the other hand, Kristi is a fashionable, "cool" girl that Catherine is desperate to befriend.

Catherine, who loves drawing, draws a few word cards for Jason to put in his book, and this begins their friendship. Soon, she is drawing many cards for him, each with personally meaningful words or phrases. Meanwhile, Kristi comes over to Catherine's house, and Catherine is terrified that David will somehow ruin their blossoming friendship.

Catherine continues friendships with both Jason and Kristi. Kristi is interested in the local boy, Ryan (whom Catherine hates for ridiculing David). Kristi wants to go on a double date with Catherine to a community center dance on Saturday. Kristi sees a portrait Catherine drew of Jason in her sketchbook and asks Catherine to invite him as her date. Catherine cannot bring herself to confess that Jason is handicapped, as she fears it might jeopardize her friendship with Kristi.

Catherine continues to grow close with Jason, and in an emotional moment she races him (in his wheelchair) around the parking lot to give him a chance to feel the sensation of running. Jason invites Catherine to his birthday party, which is the same day as the dance. Catherine agrees, figuring it's a good excuse to not go to the dance and have to deal with presenting Jason as a handicapped person.

At the party, Jason hears of the dance and asks Catherine if she'd like to go. Jason senses Catherine is hesitant to accept based on his handicap, and he becomes angered. Later, Catherine matures as a person and asks Jason to go to the dance. Jason shows up, and Catherine introduces him to Kristi and Ryan. Kristi shows her true colors by being snotty about Jason, and Catherine ends up "dancing" with Jason, her true friend. In the end, Catherine has grown and has learned to find a balance between caring for David and establishing her own identity.

More summaries and resources for teaching or studying Rules.

Rules from Gale. ©2005-2006 Thomson Gale, a part of the Thomson Corporation. All rights reserved.