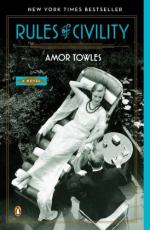 Amor Towles
This Study Guide consists of approximately 53 pages of chapter summaries, quotes, character analysis, themes, and more - everything you need to sharpen your knowledge of Rules of Civility.

This detailed literature summary also contains Topics for Discussion on Rules of Civility by Amor Towles.

"Rules of Civility," the first novel by Amor Towles, chronicles a transitional year in the life of a young woman in Manhattan. Katey Kontent narrates her own journey through the year 1938, from the future perspective of 1966, after she runs upon photographs of a man named Tinker Grey. Tinker had been important to her in 1938. Katey sees two images of Tinker at an art exhibit. All of the images had been taken in the late 1930s and early 1940s on New York subways, with a hidden camera. One image, taken in 1938, features Tinker in cashmere but not necessarily happy. The other image, taken in 1939, features Tinker in threadbare clothing but with a hint of a smile.

Katey and her friend, Eve Ross, meet Tinker on New Year's Eve in 1937, and the three develop a friendship. Tinker seems attracted to Katey, but then the three are in a car accident that seriously injures Eve. Tinker moves Eve into his luxury apartment, feeling obligated to take care of her. Katey is a secretary at Quiggin & Hale, a law firm, but soon she realizes that the job is a dead end and a disservice to the dreams her father had when he had left Russia for America. The novel includes many references to the melting pot that is Manhattan, and how immigrants retain their heritage while attempting to embrace all America has to offer.

Anne Grandyn is Tinker's wealthy and sophisticated godmother. Katey looks to her as an example of how to dress and behave, in order to move up in society. Tinker embraces the "Rules of Civility," given to him by his mother when he was a boy, written by a young George Washington. Katey admires Tinker's sense of style, but she also suspects that someone else helped decorate his sleek apartment. When Tinker and Eve travel to Key West, Katey is jealous. When they return, Tinker tells Katey that he and Eve are trying to make a go of it. They introduce Katey to a wealthy man named Wallace Wolcott, but he seems more interested in playing with his spoon than in paying attention to Katey. Katey happens to meet Tinker's brother, Hank, who refers to a woman in Tinker's life as a manipulative cunt. Katey assumes Hank means Eve, but he does not. Crafty Eve engineers a trip to London and Paris with Tinker, which they mostly spend apart. Anne tells Katey that she doesn't disapprove of Tinker and Eve, but she always thought Tinker would be attracted to someone who could challenge him intellectually.

Katey reminisces about her father, who had raised her after her mother left. She remembers that he had taught her to appreciate the simple things, but in 1938 Katey's life is becoming more and more filled with luxuries. She realizes that Anne probably decorated Tinker's apartment. When Katey receives a promotion at work that seems more like a dead end, she quits and wrangles a job with a Russian literature publisher. He warns her that the pay will be low and the job has no prospects, but a week later he helps Katey to obtain a better position at Conde Nast, where she will help launch a new gossip magazine called "Gotham." But while at her brief literary job, Katey becomes friendly with a group of young socialites who don't need big paychecks, and she insinuates herself into their social circle. One wealthy young man, Dicky Vanderwhile, is interested in Katey. He knows all of the young, white, wealthy people in New York, and he likes to crash parties. Katey runs into Wallace at one such party. Wallace invites her to go shooting. Katey sees a new side of Wallace, who is from old money and who does not feel the need to dress ostentatiously. Katey comes to appreciate his charms and values, but they do not connect romantically. The two become fast friends, however, and she helps him organize his affairs before he goes off to war. He had enlisted to assuage his guilt over having been born with too much. Tragically, Wallace is killed overseas.

Tinker proposes to Eve and she refuses, much to Tinker's relief. Eve goes off to Los Angeles, never to return. Tinker tries to rekindle romance with a receptive Katey, but then Katey discovers that Tinker is actually the paid plaything of Anne's, not her godson, and his apartment and business position are all subsidized by her. Disillusioned, Katey turns to Dicky Vanderwhile for frivolity and companionship. That relationship is doomed from the start, and Dicky is man enough to tell Katey she has been too hard on Tinker, who had, after all, raised himself up from hardship, unlike others who inherited their wealth. Katey and Tinker try once again to build a relationship, but Katey can't see him in quite the same way and a newly free Tinker yearns for a modest life. Ultimately, Katey finds great success with the magazine, "Gotham," and years later she marries a wealthy man of upstanding character. The novel is laced with references to art, literature, and photography.