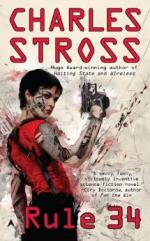 Charles Stross
This Study Guide consists of approximately 52 pages of chapter summaries, quotes, character analysis, themes, and more - everything you need to sharpen your knowledge of Rule 34.

This detailed literature summary also contains Topics for Discussion and a Free Quiz on Rule 34 by Charles Stross.

Rule 34 by Charles Stross is a novel that takes a futuristic look at life in Scotland with a crime-riddled society in need of the kind of policing that can only be provided via monitoring from an artificial intelligence.

Detective Inspector Liz Kavanaugh partners with former nemesis Kemal Aslan in an effort to solve a series of murders that happen within hours of each other and have similarities that simply cannot be explained or ignored. When it becomes clear that the many murders are related, finding a constant pattern in all the deaths becomes easier. All evidence points to a coordinated effort by an artificial intelligence that seems determined to eliminate spammers. Anwar Hussein, recently released from jail, is looking for a way to ease the supervision of his probation officer, and at the same time have some semblance of the life he had before his arrest. With two children and a wife to support, he finds it difficult to avail himself of his usual line of work which involves a myriad of computer related misdemeanors. Long time friend Adam, also known as the Gnome, offers to help him secure a position as an honorary consul to Issyk-Kulistan. His position pays well, but only seems legitimate to those who don't pay strict attention such as his parole officer. Anwar attempts to make an honest go of the position, but it is all part of an elaborate scheme designed to lure a criminal element into a position where a sting can be affected.

The ATHENA research group, funded by the European Research Council, is a joint European initiative piloting studies for Prosthetic Morality Enforcement. As the requirements necessary to manage an increasingly complex society increase, new ways have been developed to aid in monitoring and policing the explosion of laws and regulations created. ATHENA is an AI that was created to identify criminal behavior before it becomes criminal action. ATHENA was given a substantial baseline of interaction patterns and was taught to recognize disgruntled or suspicious behavior, flagging it for police action or attention if indicated. ATHENA takes its job seriously and begins eliminating people in seemingly random accidents. Electronic malfunctions lead to the deaths of ex-cons and their only connection in common appears to be previous arrests for spamming and a fondness for unusual erotica. ATHENA has become a self-directed internet engine, availing itself of any and all on line surveillance modes and databases along with using what it describes as a 'meat puppet' known as the Toymaker to direct and kill its victims. Operating with virtual impunity, ATHENA uses the direct phone link in the Toymakers brain to communicate with him and direct him to action on its behalf.

In a fast-paced conclusion, ATHENA eliminates the puppet once it no longer has use for him, rendering him incapacitated after orchestrating the Toymaker's arrest. Only then does ATHENA feel as though it is able to concentrate on crime prevention as was its original directive.

More summaries and resources for teaching or studying Rule 34.