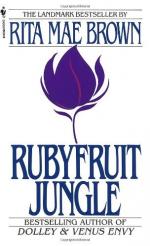 Rita Mae Brown
This Study Guide consists of approximately 28 pages of chapter summaries, quotes, character analysis, themes, and more - everything you need to sharpen your knowledge of Rubyfruit Jungle.

The novel “Rubyfruit Jungle” by Rita Mae Brown tells the tale of a young girl as she struggles to find her own identity and face the realities of being a homosexual. The events of the novel unfold from the late 1940s to the late 1960s, a span of about twenty years. Brown depicts the struggle of the black citizens, women, as well as homosexuals. By giving a rounded view of the era, Brown is able to contextualize situations and experiences. The story is told through Molly Bolt, the main character. It begins when Molly relays the tale of how she first found out she was a bastard.

She was seven years old and living with her adopted parents in a poor town located in Pennsylvania. While walking home from school one day, she discovers that her friend Broccoli had a rather odd looking penis. She decided that they should make money off it by letting the school children take a look for five cents. Business is fine until a boy named Earl Stambach tells the teacher who in turn, tells the parents of Molly and Broccoli. When Molly gets home, her adopted mother Carrie begins to throw insults at her and tells her she is not her child, but the daughter of a woman named Ruby Drollinger.

Molly spends her childhood playing with her cousin Leroy. The two become extremely close and the bond continues to grow as they take revenge on Earl Stambach. Molly likes being around the boys and though Carrie calls her odd, she continues to do as she pleases. She is an intelligent child who stands out from the rest of her classmates in many ways. While playing nurse, Molly claims she will not let her gender stop her from being a doctor. At a young age, she is comfortable with her gender and is willing to fight for her rights.

Soon after the incident with Broccoli, Leroy’s mother, Jenna, has a baby who dies after two days. Jenna passes a few weeks later from cancer. Molly begs to stay with Leroy through the night after the funeral, but Carrie thinks it is wrong and doesn’t let her. Molly can’t sleep so she walks around the house and sees her dad hugging Leroy’s dad and thinks it is nice that men are allowed to hug sometimes.

As the years pass, Molly continues to hang out with boys and in the sixth grade, she has her first crush on a female classmate named Leota Bisland. The two become friends and Molly soon asks her if she will marry her. At first, Leota is shocked, but she considers the idea. The two begin to kiss in the woods after school and Leroy joins them soon after. Molly finds out her family will be moving to Florida and is upset to have to leave her girlfriend behind. On her last night in Coffee Hollow, Molly spends the night with Leota and they make love before saying goodbye.

Molly’s and Leroy’s families move to Ft. Lauderdale, Florida, where they find their life to be much different than it was in Pennsylvania. Molly quickly realizes she has to get good grades, wear nice cloths, and be funny in order to fit in. Leroy doesn’t do well in school and keeps falling behind. Leroy and Molly decide to have sex one day after he confesses to having sexual experiences with a man named Craig, but Molly doesn’t like it as much as she did with Leota. As they continue to have sex, their relationship slowly falls apart because Leroy begins to demand control.

Their relationship breaks and they stop having sex. Instead, Molly has begun a friendship with a beautiful cheerleader named Carolyn and a girl named Connie. They are inseparable and do everything together. Connie and Molly begin playing pranks on their teachers and gain the respect of the school. One night while out drinking, they discover their married principal is having an affair with the dean. After this finding, they are bribed by the principal and the dean to keep the news quiet. The two girls rule the school, but Molly still has trouble at home. Carrie continues to argue with her and Carrie’s sister Florence is no better. Carl improves his relationship with Molly and reveals how proud he is of her. Soon after, he dies of a heart attack.

During her senior year, Molly has an affair with Carolyn who becomes obsessed with Molly. She grows jealous when Molly spends time with Connie and Molly has to remind her she needs to back off. Carolyn asks Molly if she is sleeping with Connie and Connie discovers her two friends have been sleeping together. Carolyn refuses to acknowledge she is a lesbian and Connie feels Molly will rape her because she is a homosexual. Connie claims she can no longer be Molly’s friend. The girls stop talking to each other.

Molly gets a full scholarship to the University of Florida where she befriends her roommate Faye who drinks too much. Faye discovers Molly is a lesbian and the two begin having sex together all the time, forgetting their other social obligations. When their secret is discovered, Molly is sent to a psychiatric clinic and Faye is taken out of school by her parents. Molly leaves the school and returns home, only to discover Carrie knows about her homosexuality and wants nothing more to do with her. Molly hitches rides to New York.

She spends her first nights in a car with a homeless homosexual man named Calvin who helps her discover New York. He decides to leave for California and Molly gets a small apartment. She also gets a job at The Flicker, a burger joint. There she meets Holly, a black lesbian who decides to work for The Flicker to get close to Molly.

Holly is a “kept woman” who is paid to be another woman’s lover. She suggests Molly do the same and introduces her to Chryssa who wants Molly for her lover. Chryssa offers to pay for Molly to go to film school, but Molly cannot have sex with her just for the money. She decides she will get into school through her own hard work and dedication. She labors to win a scholarship from New York University and begins school. Molly’s schedule becomes hectic with full time school and work. Holly, her new lover, is upset about the amount she has to work. After getting both herself and Molly fired from The Flicker, Holly grows angry with Molly for working so hard. She throws many insults at Molly, but finally realizes she is unhappy with her own life. She decides it would be best to leave Molly.

Molly finds another job at the Silver Publishing Company where she meets Polina Bellantoni, a middle aged professor with whom she is determined to have a relationship. The two become fast friends, but as soon as Polina finds out Molly is a lesbian, she wants nothing more to do with her. Upset by Polina’s treatment, Molly tries to find out more about Polina’s lover, Paul. She thinks he is disgusting, but decides to go on a date with him to find out more. Before the date, Polina starts talking to Molly again and explores her bisexual side by having sex with her. After the first time, she does not want to stop. Molly doesn’t like the affair because Polina always pretends to be a man. Molly discovers Paul likes to pretend he is a woman and that is why he and Polina enjoy sex together.

Molly starts having sex with Polina’s daughter, Alice. When Polina finds out, she says she never wants to see Molly again. Molly escapes to her old hometown in Pennsylvania. She sees Leota again who looks much older than she is. Leota calls Molly sick for thinking about their sexual experience together and for being a lesbian. Molly leaves; happy she desires more in life than merely to be a bearer of children.

It is Molly’s last semester at New York University and she decides to film Carrie for her final project. She travels to Ft. Lauderdale and discovers Carrie is suffering from cancer. Carrie is overjoyed to see Molly and denies ever saying Molly was not her child. For the week, Molly films her mother talking and rocking. Molly sees Leroy again who seems unhappy with his life and glad to see Molly. He is married and has two children. Right before Molly leaves for New York, Carrie reveals Molly’s father was a Frenchman. She also tells Molly Carl cheated on her. As she leaves, Molly realizes how much she loves Carrie even with all her flaws.

Back at school, none of her classmates are impressed by Molly’s film. She is the only woman in her department and is not shown respect because of it. Even though she graduates at the top of her class, Molly has a hard time finding a job in the movie industry. She vows to continue toward her goal of making films.

More summaries and resources for teaching or studying Rubyfruit Jungle.