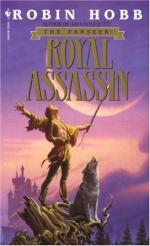 Robin Hobb
This Study Guide consists of approximately 38 pages of chapter summaries, quotes, character analysis, themes, and more - everything you need to sharpen your knowledge of Royal Assassin.

This detailed literature summary also contains Topics for Discussion and a Free Quiz on Royal Assassin by Robin Hobb.

Royal Assassin, by Robin Hobb, is the story of FitzChivalry the bastard grandson of King Shrewd Farseer. Fitz has been trained as an assassin and sworn his life to the Farseer line. Fitz comes to realize that he must choose his own path. The story continues through trials as Fitz's uncle Regal attempts to kill Fitz and then successfully kills King Shrewd.

As the story begins Fitz is in the mountain kingdom recovering from when his uncle, Prince Regal, attempted to poison him. Fitz uses the Skill, a mental ability to find someone no matter of the distance, and realizes he is needed at home by his grandfather King Shrewd. Fitz and his friend Burrich ride back to Buckkeep. When they return, Fitz finds that his childhood friend, Molly, has come to Buckkeep in search of him. King Shrewd is very ill and his son, king-in-waiting Verity, uses Fitz for his various talents. Fitz is a trained assassin and has a slight ability to use the Skill. Fitz also is able to use the Wit, a mental ability to communicate with animals. Using the Wit Fitz finds a wolf named Nighteyes and bonds with him as pack brothers. Using the Wit is considered dark magic and those found guilty of it are burned at the stake so Fitz tries keeps this a secret.

Verity has ships built to help protect the borders from Red Ships, Outlanders who come to raid and kill Verity's people. Even by using the Skill, Verity is unable to fully coordinate the ships in a way that makes them efficient at protecting the shores. Verity's wife, queen-in-waiting Kettricken, tells Verity that she believes she knows where to find the Elderlings, legendary beings that once rid the shores of the Red Ships. Desperate for an end to the raiding wars, Verity himself leaves in search of the Elderlings.

Not long after Verity goes on this search, Regal announces that they have received word that Verity is dead. Fitz knows this to be untrue due to his Skilling ability but can't prove it. Regal has his father killed. Fitz, with help from others loyal to Verity, are able to get Kettricken out of the castle unnoticed. Regal finds that Fitz is using the Wit and has him imprisoned. Fitz is being beaten badly by Regal's guards. Finally Fitz can't hold out any longer and waits until no one is watching to take a potion that helps him to leave his body, and he resides within Nighteyes' body.

Burrich digs up Fitz's body and calls Nighteyes to him. Fitz had been happy in Nighteyes' body but is called back to his own broken body regardless. Fitz is then faced with the problem of trying to prove his innocence of the charge of using the dark magic of Wit, but is unable to do so.

More summaries and resources for teaching or studying Royal Assassin.