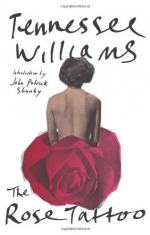 Tennessee Williams
This Study Guide consists of approximately 83 pages of chapter summaries, quotes, character analysis, themes, and more - everything you need to sharpen your knowledge of The Rose Tattoo.

Research the history of vaudeville in any major U.S. city. To what other forms of comic and popular entertainment is it related?

Compare and contrast the cultural presence and importance of the gods Dionysus (Greek) and Bacchus (Roman) in ancient Greece and Rome.

More summaries and resources for teaching or studying The Rose Tattoo.

The Rose Tattoo from Gale. ©2005-2006 Thomson Gale, a part of the Thomson Corporation. All rights reserved.