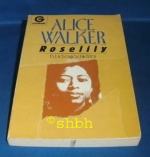 Alice Walker
This Study Guide consists of approximately 42 pages of chapter summaries, quotes, character analysis, themes, and more - everything you need to sharpen your knowledge of Roselily.

"Roselily" was first published as the opening story in Alice Walker's first collection of short stories, In Love and Trouble: Stories of Black Women (1973). The collection won the Rosenthal Award of the National Institute of Arts and Letters, and was widely and favorably reviewed. "Roselily" has been included in several important literary anthologies, including Calling the Wind: Twentieth-Century African-American Short Stories (1993).

The story of a rural African-American woman from Mississippi who is about to escape poverty and disgrace by marrying a man she barely knows, a Muslim from the North, it received praise from critics for giving a voice to a segment of the population that has seldom been represented in fiction. The central character is an unmarried woman with three children, aged three, four, and five, and Walker depicts her with respect and compassion.

The prospects for Roselily finding happiness in her loveless marriage seem dim; she is one of the many female characters in In Love and Trouble who suffer not only from financial hardship but also from the imbalance of power between men and women. In part because of her own disillusionment with the inequalities that she faced when the Civil Rights Movement did not lead to a significant increase in equality for African-American women, Walker's work is frequently concerned with women's struggles and misguided loyalties. In an interview published in the prose collection In Search of Our Mothers' Gardens, Walker described the central characters in In Love and Trouble: "thirteen women— mad, raging, loving, resentful, hateful, strong, ugly, weak, pitiful, and magnificent—try to live with the loyalty to black men that characterizes all of their lives. For me, black women are the most fascinating creations in the world."

More summaries and resources for teaching or studying Roselily.

Roselily from Gale. ©2005-2006 Thomson Gale, a part of the Thomson Corporation. All rights reserved.