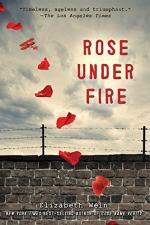 Elizabeth Wein
This Study Guide consists of approximately 120 pages of chapter summaries, quotes, character analysis, themes, and more - everything you need to sharpen your knowledge of Rose Under Fire.

This detailed literature summary also contains Quotes and a Free Quiz on Rose Under Fire by Elizabeth Wein.

The following version of this book was used to create this Study Guide: Wein, Elizabeth. Rose Under Fire. Hyperion, 2013. Paperback.

Rose Under Fire begins in Southampton, England, with Rose’s first entry in a notebook she has received from her friend and fellow ATA pilot, Maddie. Rose attempts to write an accident report for Celia, another fellow pilot who died in a plane crash. The mechanic who investigates the accident believes Celia attempted to use her plane to tip a German flying bomb, a procedure known as taran, but that she did not possess the skill needed to complete the task safely. Rose begins to feel the urge to take down flying bombs, and wishes she could be a combat pilot, but she cannot, because she is a woman. However, Rose’s Uncle Roger, an influential man, arranges for her to transport himself and some other passengers into France.

When Rose writes her next entry, she is at the Paris Ritz, where she is sent after she escapes from Germany, where she had been held in a concentration camp called Ravensbrück. She decides to write down how she ended up in Germany and everything she experienced in Ravensbrück.

Rose writes that she had sighted a German flying bomb while flying a Spitfire plane back to England from France, and she believed the bomb was aimed to hit Paris. She tried to tip it off course. She succeeded, but she was captured by two German planes.

Once in Germany, Rose was sent into quarantine, where she met a cunning, sneaky young French woman named Elodie who was a part of the French Resistance effort. However, Rose and Elodie were split into different groups and they did not get time to become closer friends. Rose was set up working a job creating the fuses for flying bombs, a relatively comfortable and easy task. However, once she realized what she was making, she refused to work and was sent to the Bunker, where she received 25 vicious lashes twice in two weeks, leaving her unconscious and with permanent scarring. Rose was then sent to Ravensbrück, a women’s work camp.

When Rose came to, she found herself on a plank bunk, and Róża, a young Polish girl who eventually became her close friend, asked her to “Say the counting-out rhyme,” which was a poem Rose recited to herself during the lashings to get herself through. Rose soon discovered Róża was a Rabbit, or one of the Polish prisoners subjected to cruel medical experiments conducted by Nazi doctors. Rose was taken under the wing of Lisette, the Camp Mother, and became a part of Lisette’s Camp Family, also consisting of Karolina, a Polish filmmaker and also a Rabbit. During an air raid, Rose met Irina, a Russian combat pilot, and Irina also became a part of the Camp Family.

After Rose healed from her lashing wounds, the Camp Authorities assigned her to a work group of other tall women, led by a German prisoner named Anna. Anna took to Rose because Anna went to college in America. Rose decided to bribe Anna in order to receive calcium injections to strengthen the bones in Róża’s legs, and Anna revealed to Rose that as a pharmacist, she had worked behind-the-scenes of the medical experiments at one point, and had stolen morphine for the prisoners to help them sleep through the pain.

Later, Anna gave Rose the next day’s death list, and all of the Rabbits were to be killed. Rose, Irina and the other prisoners devised a plan to hide the Rabbits and turn off the lights during roll call so that the Camp Authorities could not possibly keep track of which numbers were missing. In this way, the Rabbits were saved. However, soon Rose was also called to be sent to the gas chambers. Lisette helped Rose to hide with the other Rabbits, and during the time she was hiding, Karolina took Rose’s coat with her number on it, and was sent to death in Rose’s place. Lisette took Rose and Róża out of hiding and instructed them to make their way to the transport trucks and meet up with Irina, who had been placed on a truck with the Punishment Block. Lisette emphasized to Rose the importance of getting Róża out, so she could serve as evidence of what happened in Ravensbrück.

After Rose, Róża and Irina got off the trucks, they escaped, though they were quickly captured again by German airmen. However, the girls stole a plane and Rose and Irina flew Róża to Belgium, to freedom. After a few weeks, the girls were taken out of Belgium in a convoy, but Rose lost track of Róża and Irina and was devastated by the loss.

Back in the present moment, Rose is struggling with how to bear witness to the world about what she experienced. She decides to publish the poems she had created in Ravensbrück and to go to the Doctors’ Trial in Nuremberg as a journalist. She drafts the story in her notebook, titling it “Kite-Flying: Four Principles of Flight.” In Nuremberg, Rose meets Róża again, and eventually Róża decides she cannot serve as a witness because she is self-conscious of the fact that the other witnesses are more educated than she is. So, she watches the trial with Rose. At the trial, Rose sees that Anna is alive, and Anna reveals that she is a witness at this trial but will be one of the accused at the Ravensbrück trial.

After the trial, before she is to leave Nuremberg, Rose discovers that she can take a joy trip to the beach along the Adriatic Sea, which is a destination Karolina had longed for while at Ravensbrück. Rose requests to bring Róża along with her, and the novel ends with the two girls flying a kite along the beach.

More summaries and resources for teaching or studying Rose Under Fire.