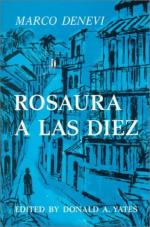 This detailed literature summary also contains Topics for Discussion and a Free Quiz on Rosaura a Las Diez by Marco Denevi.

The story begins with Inspector Julian Aguirre interviewing Mrs. Milagros, the proprietress of La Madrilena boardinghouse. A murder has been committed, and Mrs. Milagros is giving the inspector a detailed account of one of her boarders, Mr. Camilo Canegato. Camilo has lived at her boardinghouse for twelve years. He is a quiet man, an artist, who has never caused any trouble and whom she regards as a member of the family.

The first half of the book details Mrs. Milagros's account of Camilo and his romance with a mysterious woman named Rosa. Camilo meets Rosa when he is asked by her father to restore a painting of his deceased wife. Every Wednesday, a perfumed letter arrives at the boardinghouse for Camilo, and Mrs. Milagros, her daughters, and Miss Eufrasia find a way to read the letter when Camilo is not around. The women become obsessed with Camilo's love affair. Finally, after eight weeks, the love affair comes out in the open when one of the letters arrives without Camilo's name on it. Mrs. Milagros opens the letter, reads it, and confronts Camilo about it. He tells her the whole story, and Mrs. Milagros wants to find a way to help Camilo and Rosa to get married.

Then one evening, Rosa shows up at the boardinghouse unexpectedly. Everyone is thrilled to see her, but Camilo acts very strange. He doesn't want to talk with her or touch her. Still, Mrs. Milagros pushes the two towards marriage, thinking that Camilo doesn't have the courage or fortitude to do it himself. After the wedding there is a party at La Madrilena, and then Rosa and Camilo leave for the hotel. Later, one of the boarders, David Reguel, returns to the house yelling, "He's killed her!"

The next part of the book is David Reguel's testimony to the inspector. He reports that foresaw the murder. David has never liked Camilo. He feels that Camilo is always on the brink of exploding because of his pent-up anger at being a physically deficient man. The educated David has all kinds of theories about Camilo. He adds to the evidence in the case by saying that Rosa told him that her real name is Marta Correga. Also, David follows Camilo and Rosa to the hotel and sees Camilo leave the hotel without Rosa. David investigates and finds Rosa's strangled body.

Part III covers the interview between the inspector and Camilo. Camilo tells the inspector that he's always had difficulty differentiating between dreams and reality, and he's taken medicine for this problem in the past. Mrs. Milagros convinced him that he didn't need it anymore. He confesses that he invented Rosa, wrote the letters to himself, and fabricated the entire romance. When Rosa showed up at the boardinghouse, he couldn't tell if she was real or not. He wanted to get rid of her but didn't know how.

Next to be interviewed is Miss Eufrasia Morales, a retired school teacher who lives at the boarding house. She reports being skeptical of Camilo and Rosa's romance because a friend of hers told her that Camilo cannot paint portraits from life. He only paints over photographs. Thus, Camilo's story about the romance cannot be true. Eufrasia adds that the maid, Elsa, has long been in love with Camilo, and that there is a letter somewhere that Rosa didn't want anyone to know about.

Last of all, Elsa the maid produces the letter written by Rosa (Marta Correga). The letter clears up the crime, showing that Marta Correga is a prostitute, and that Slit Turk is her murderer. Camilo's name is cleared, and he is rescued by the woman who loves him.