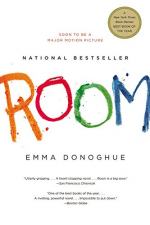 Emma Donoghue
This Study Guide consists of approximately 49 pages of chapter summaries, quotes, character analysis, themes, and more - everything you need to sharpen your knowledge of Room.

This detailed literature summary also contains Quotes and a Free Quiz on Room by Emma Donoghue.

Jack turns 5 years old as the story opens. He is a bright boy but has lived his entire life in garden shed that he calls Room. He believes this is the entire world and can't imagine that there is anything real outside the Room. He lives there with his Ma. Their only outside contact is a visitor who comes most nights that Jack knows as Old Nick. Old Nick rapes Ma each night while Jack hides in the Wardrobe.

Old Nick abducted Ma when she was 19 years old. She was a college student and he tricked her by asking for help for his sick dog. He had apparently planned the abduction for a long time because he had a garden shed converted into a self-contained apartment in his back yard. Ma tried to escape by digging out, but discovered that Old Nick had buried wire under the shed. She tried to fight him once but he brutalized her in retaliation and she never tried again. She gave birth to a daughter who died immediately. She gave birth to Jack when she was completely alone and she was his only contact until they escaped.

When he turns 5, Ma realizes that their lives are in increasing danger. She reveals to Jack that the world they see on television is real, and that Outside really exists. Jack is frightened but finally agrees to go along with Ma's plan. She makes Old Nick believe that Jack is ill then she wraps Jack in a rug and tells Old Nick that he died. Old Nick puts the rug in the back of his truck, apparently with plans to bury Jack somewhere, but Jack escapes and finds help. When the police arrive, one of the officers manages to figure out where he'd come from and they rescue Ma as well.

There is a media frenzy following their escape. They are taken to the police station then to a hospital where professionals gather forensic evidence. Then they arrive at a mental health facility where they remain for the coming days. They are there when Ma's mother, Grandma, arrives. There's a tearful reunion and Ma discovers that her parents divorced after she disappeared. Her mother has remarried and her father has moved to Australia. Ma's mother is just relieved to have Ma home and she immediately opens her heart to Jack. Ma's father sees Jack as a symbol of Ma's abduction and rape.

Jack discovers there are many new things to learn. He's smart in some ways because Ma has taught him to read, count, and do math. However, he's socially naïve and doesn't know how to conduct himself in even the most basic situations with other people. He is very attached to Ma and has trouble being away from her for even short periods of time.

One day, Ma drops into a bout of depression. It's happened before and Jack refers to it as “Gone” because Ma doesn't respond to anything. Jack goes for an outing with Ma's brother, Paul, and his family. When he returns, he finds that Ma is seriously ill. He calls for help and nurses discover that Ma has taken an overdose of pills, almost committing suicide. It takes some time for her to recover and Jack stays with Grandma during those weeks. He gradually begins to learn more about the Outside world and begins to feel more at home, though he sometimes longs for the security he felt in Room.

When Jack and Ma are reunited, Ma has secured an apartment for them to share. They make one final visit to Room where Jack says good-bye to the space that made up his entire world for the first 5 years of his life.

More summaries and resources for teaching or studying Room.