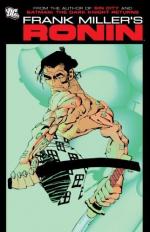 Frank Miller (comics)
This Study Guide consists of approximately 39 pages of chapter summaries, quotes, character analysis, themes, and more - everything you need to sharpen your knowledge of Ronin.

This detailed literature summary also contains Topics for Discussion and a Free Quiz on Ronin by Frank Miller (comics).

Ronin is a series of six comic books chronicling the story of Billy Challas, an emotionally- and physically-handicapped man who, though he was born without limbs, can move objects with the power of his mind. The artificial intelligence Virgo, who is studying Billy, uses him to bring the samurai hero Ronin to the streets of a depressed, futuristic New York. Billy becomes psychologically torn between Ronin and his own personality.

As the story begins, Billy, who has been rejected by his mother, lives in Aquarius Complex, where Virgo monitors Billy's mind in the hope of finding a breakthrough in cybernetic technology, thus allowing biocircuitry, a kind of living machinery, to directly interface with the human mind. Virgo alone, however, realizes that Billy is far more powerful than anyone realizes. Using Billy's dreams, Virgo orchestrates an elaborate fantasy designed to push Billy's powers to their limits. By creating a robot version of Agat, the demon from Billy's nightmares, Virgo compels Billy to adopt the role of Agat's nemesis, the hero Ronin. To this end, Billy telekinetically reconstructs himself with biocircuitry, literally becoming the hero Ronin.

Ronin's mind and body are altered; his original language forgotten; the newborn Ronin escapes to the bleak, blight-stricken streets of New York City, where he does his best to scratch out an existence in the midst of a gang war. When Casey, Billy's longstanding crush, arrives to apprehend him, the two wind up fighting side by side against a cannibal threat. The two soon fall deeply in love. Meanwhile, back at Aquarius Complex, the robot Agat, unknowingly serving Virgo, steals the identity of the company president, steering the corporation, and its biocircuitry technology, to an apocalyptic war. Peter McKenna, the creator of biocircuitry, is imprisoned for his dissent and for his refusal to believe in Virgo's story of demons and reincarnated samurai warriors.

While returning to Aquarius Complex, Ronin and Casey are separated. Ronin is imprisoned within the complex and psychologically conditioned by Virgo to revert to the childlike Billy. Virgo needs Billy awake to learn from his powers but needs him in a controllable mental state. Casey, formerly the head of Aquarius Complex security, infiltrates the complex, intent on rescuing Billy/Ronin. Inside the complex, Casey encounters her husband, Peter McKenna, who tells her that Billy's full potential is limited by the fantasies that Virgo has been forcing upon him. Peter advises that Casey break the fantasy, make it fail. Once Billy's full power is tapped, only then can Virgo be dealt with.

Reunited with Billy/Ronin, Casey does everything in her power to upset Billy's "Ronin" fantasy. She kills Agat with ease, shames Ronin for letting a woman fight in his stead, and demands that he settle the debt of his samurai honor by taking his own life. Forced to choose between his life and his fantasy, Billy finds the strength to condemn the mother that once condemned him. Billy summons the full strength of his powers, destroying Aquarius Complex, sparing only Casey and himself.

More summaries and resources for teaching or studying Ronin.