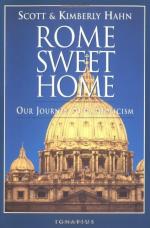 This detailed literature summary also contains Topics for Discussion and a Free Quiz on Rome Sweet Home: Our Journey to Catholicism by Scott Hahn.

This book takes its place within a long series of apologetic works written by Americans on behalf of the Catholic Church over the last fifty years. Many Christian conservatives see great moral decay in society and see the Protestant Churches as largely unable to resist it. The Roman Catholic Church, due to its hierarchical structure, is able to resist moral decay and hold fast to Christian tradition in the face of modern ideologies. Further, since the Second Vatican Council, Catholics have opened up to ecumenical dialogue with Protestants and many figures in the Catholic Church have written books and articles explaining the doctrines of the Catholic Church to Protestants. Many Catholics have become quite aggressive in evangelizing Protestants. Rome Sweet Home is the story of one man deeply affected by learning about the true teachings of the Catholic Church after decades of being a staunch anti-Catholic. He and his wife were also drawn to the Church for its long-standing commitment to family values.

The story begins with Scott's story of how he came to become a Christian believer in the first place and how he came to be deeply interested in theology. He became convinced that Reformed/Calvinist theology was the deepest and most thoughtful theological approach to take to Christianity. Traditional Reformed theology is very anti-Catholic and Scott Hahn takes on these attitudes. The book describes his journey as a professor of theology, Bible study teacher and pastor who continues to deepen his knowledge of theology and is led, piece by piece, towards Catholic positions. His wife, who holds an MA in theology was a committed Presbyterian as well, whose father was a Presbyterian minister. She and her husband are deeply divided about whether to become Catholic. He is eager to join and she is eager to stay Presbyterian. For four years after Scott Hahn's conversion, they live under incredible stress because they are members of separate churches. Finally Kimberly converts. After this the book moves to explain their joint perspective being Bible-believing Christians in the Catholic Church and exhort their fellow Bible-believers to come into the Catholic faith. They also encourage Catholics to pay more attention to the teachings of the Bible as they are consonant with and never at odds with the teachings of the Church.

The book is narrated separately by both Scott and Kimberly. They describe their own perspectives of their being led into the Catholic faith.