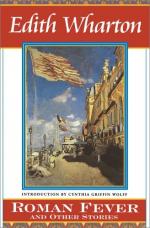 Edith Wharton
This Study Guide consists of approximately 44 pages of chapter summaries, quotes, character analysis, themes, and more - everything you need to sharpen your knowledge of Roman Fever.

A Backward Glance is Wharton's autobiography, published in 1934, three years before her death.

Ellen Glasgow's short story, "The Difference" (1923), shows one woman's reaction to finding out about her husband's unfaithfulness.

Daisy Miller (1878) by Henry James tells of a young girl in Rome during the height of the malaria epidemic.

Nathalia Wright's American Novelists in Italy (1965) discusses a number of American writers and their relation to, and the influence of, Italy.

Edith Wharton and Henry James: The Story of Their Friendship (1965), by Millicent Bell, uses the correspondence of the...

More summaries and resources for teaching or studying Roman Fever.

Roman Fever from Gale. ©2005-2006 Thomson Gale, a part of the Thomson Corporation. All rights reserved.