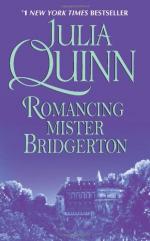 Related Topics
The Duke and I: Bridgertons Book 1
The Duke and I
The Viscount Who Loved Me
An Offer From A Gentleman
To Sir Phillip With Love
When He Was Wicked
It's In His Kiss
On the Way to the Wedding

Julia Quinn
This Study Guide consists of approximately 30 pages of chapter summaries, quotes, character analysis, themes, and more - everything you need to sharpen your knowledge of Romancing Mister Bridgerton.

"Romancing Mister Bridgerton" by Julia Quinn is about a young lady who lives in London in the early 1800s. Penelope has loved Colin since she was 16. Now, years later, she was decidedly a spinster. She had come to terms with the fact that the two of them are not suited, but she still appreciates their friendship. Back home from his travels, Colin began to see Penelope in a new light. Meanwhile, the Ton are escaping boredom by trying to determine who Lady Whistledown is. Colin and Penelope uncover the truth about the mysterious society paper writer.

Penelope has been in love with Colin for years. The two have become friends and they are comfortable together. They are at a ball, talking with each other, when Lady Danbury announces that she is going to give 1,000 pounds to the person who unmasks Lady Whistledown.

As the Bridgerton and Featherington families discuss the Society Papers, it becomes apparent that the Lady could be anyone. Several of the family members have an interest in writing. Once of these writers is Colin. While he was traveling, Colin kept a journal. Penelope sees it and loves his writing.

The two become very good friends and he comes to Penelope with his concerns that Eloise is Lady Whistledown. She disagrees with him, but he points out that someone else might accuse Eloise and words are very powerful, To make his point, he says that if he publicly stated that he seduced Penelope, she would be ruined, even if they never even kissed. This gets them both thinking about kissing and Penelope asks him to kiss her.

The kiss rocks his world. He is completely mentally confused about his attraction to her and so he leaves. A few days later, at a ball, he plans to apologize to her. However, the focus of the ball is Cressida's announcement that she is Lady Whistledown. This shocks everyone, and Colin loses his opportunity to apologize.

He goes out the next day to apologize to Penelope and sees her getting into a hack. Colin follows her to a bad section of the city and sees her leave an envelope behind a prayer book. Confronting her, he opens it and discovers that she is Lady Whistledown,

They continue to fight as they head back home, but the fighting turns into something else, and as Penelope gets out of the carriage, Colin proposes to her. Everything seems perfect, especially on the evening of their engagement ball. Then, couriers come in with a new Lady Whistledown column. They were supposed to do that at a ball the next evening, but Penelope's editor decided this would bring more publicity. Colin is furious, and he brings Penelope upstairs as soon as they get a chance. They argue some more, and during that argument, he realizes he loves her. They make love.

The two get married, and things are going well until Cressida shows up to blackmail Penelope. She has figured her secret out. Colin takes care of the situation by announcing what his wife did while they are at a ball.